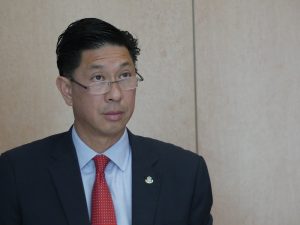 GREAT BAY – Minister Emil Lee (Public Health, Social Development and Labor) has suggested in a press statement that the actual costs of some of the cleanup activities that took place after Hurricane Irma were ‘double the original estimate.” He also noted that some of the documentation that was submitted with invoices showed “discrepancies.”

If that is the case, the minister said in his press statement, “wouldn’t it be reasonable to ask questions about it?” Lee said that asking those questions is not the same as “objecting to paying for work done.”

Lee’s press statement comes after accusation by Prime Minister Marlin and Vromi-Minister Emmanuel that he had been delaying payments to truckers, heavy equipment operators and workers that have been cleaning up the island.

“These accusations are a shameful attempt to look for a scapegoat that allows them to diffuse blame as well as serving a political objective of tarnishing my reputation.”

Lee emphasized that the timely payment for goods and services is “a critical part of getting our economy functioning.” He noted that the economy is ‘in serious trouble” and that it needs cash injections that will come mostly from insurance companies and from government spending.

“I don’t have a problem with paying as quickly as possible for actual work done.” In this statement, the minister underlined the word ‘actual’ thereby suggesting that some of the invoices he saw where of a phantom nature.

“Questioning the costs and lack of accountability should not be confused with an intention to delay payment of invoices for cleanup efforts post Irma, it is definitely not my intention to delay payments to hard working individuals like the first responders, civil servants, cleanup crews and many more that neglected their own personal conditions to serve their country,” Lee stated.

The minister did not stop there: “This is simply an attempt to intimidate, bully and slander me. Sadly, I believe this is only the beginning of a vicious campaign to discredit me. I don’t have anything to hide and welcome the opportunity to bring light to the issues. I have sworn an oath to the people of St. Maarten to protect them. Especially in this time of limited financial resources, I have an obligation to ensure that money is not wasted, misappropriated, stolen, squandered, or misspent.”

The matter of payment for hurricane cleanup is not the only bee in Minister Lee’s bonnet. He also asked the Government’s Accountant Bureau SOAB to audit the receipt and delivery of relief goods. That request comes on the heels of accusations by political opponents – in particular Minister Emmanuel – that Lee’s ministry has been withholding relief goods.

Lee has now asked for an audit with particular focus on his own ministry. “I am truly disheartened. It is so sad that in a time when the people need help and hope, politicians would fabricate stories for political gain. After working so hard after Irma, many of my staff has been hurt by the comments and suggestions that the ministry would withhold anything from needy people because the accusation implies that they were somehow complicit or participating in the withholding of relief goods. I welcome a thorough investigation into the entire receipt and delivery of relief goods. In the interest of transparency and accountability, I would recommend that government request a similar investigation into the cleanup process including the marine salvage work.”