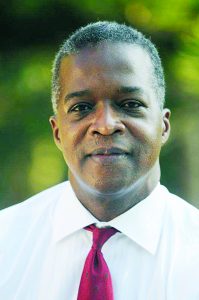 WILLEMSTAD – “Are you nervous” Judge Tjarda van der Spoel asks. “Yes, to be expected,” answered the President of the Central Bank of Curacao and St. Maarten, Dr. Emsley Tromp. The public prosecutor in Curacao accused Tromp of a multi-million fraud and demands a 6-month conditional prison sentence, 240 hours of community service and a fine of 10 million guilders (just below $5.6 million), Leoni Leidel-Schenk reports on Caribisch Netwerk.

The prosecution is convinced that Tromp “consciously and by using his position” has defrauded the Dutch-Antillean and Curacaolenean community of around 5.5 million guilders ($3 million).

“He has benefited from the fact that his environment looked up to him and that within the Central Bank questions that should have been asked about his pension provisions were not asked,” the prosecution says.

Tromp learned via the media about the dismissal procedure against him and last week he saw the decision to dismiss him for the first time. A year ago, he voluntarily stepped down already.

When the judge asks Tromp whether he will fight his dismissal, the answer is: “I have always worked in the interest of the country. I already wanted to resign earlier. But when the Schotte-government was in power (between 2010 and 2012), Piet Hein Donner (former Minister of Kingdom Relations) had asked me personally on behalf of the Dutch government to stay on. I did this in the interest of the country. And now I have this case.”

When the judge points out that the case is about fiscal issues, Tromp says that he does not understand this. “I do not recognize myself in the dossier. I have studied in the United States and I have paid taxes there. I came back to Curacao with the same discipline to always pay my taxes here. Because I have studied in the United States and not in the Netherlands, my Dutch is not very good. This is why I have always let an expert look at my tax returns. I have never had a complaint,” a rather embarrassed Tromp said.

Tromp told the court that he received his 2016 tax return after the pro forma hearing about his court case in July. According to the tax inspectorate, there was nothing wrong with the tax return (according to Tromp). “I assume that I have not done it wrong either during the past 32 years.”

Tromp furthermore said that he borrows money from his pension fund foundation to pay for the studies of his sons and to take care of his mother and grandmother. “The receipts for these expenditures have been mixed up after the house searches.” But according to the public prosecutor, Tromp used his foundation as a current account for private expenditures. Tromp borrowed $1.5 million from E.T. Pensions and he built up a current account of $2.4 million.

Tromp’s attorney Niels van der Laan maintains that the case does not belong in the administration of criminal law, because the intent the public prosecutor claims is lacking. “This is a fiscal difference of opinion; the tax inspectorate and my client can solve this together.”

The court will render its verdict two weeks from now, but that will not end Tromp’s legal troubles. According to the public prosecutor’s office there are more investigations underway against Tromp. These investigations focus on the inexplicable accumulation of wealth by a civil servant, money laundering and cooperation with a prohibited transaction.

Tromp became an advisor to the Central Bank in October 1985. In 1991, at the age of 30, he was appointed president of the Central Bank. “I did not think about pensions at that time,” Tromp says. “It was still so far away.” Nevertheless he established his own pension fund a couple of years later: the E.T. Pensions Foundation.

Tromp says that he took advice from Ralph Palm, the current CEO of local insurer Ennia, that was last week the target of a house search. Palm allegedly also has his own pension fund, but he says that he was never involved with Tromp’s pension fund.