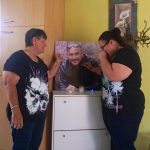 SCHIPHOL – New video footage has surfaced of the fatal arrest of Aruban Mitch Henriquez; the Public Prosecutor said on Monday that he was unaware of this material, Natasja Gibbs reports on Caribisch Netwerk.

On Monday the trial against two police officers who were involved in the death of Henriquez began. The trial took place in a heavily secured courtroom at Schiphol airport. The names of the police officers remain confidential, in spite of many attempts by the family to obtain them. The court ruled that the measure has been put in place because the safety of the officers is at stake.

Immediately after Henriquez death in June 2015, there were death threats on social media against the arresting officers; one of the officers is of Aruban descent.

Family of Henriquez obtained the new video footage from a private investigator. According to their attorney Richard Korver these images show clearly that Henriquez is turning purple during the arrest and that the police officers are looking scared at each other.

How it is possible that the Rijksrecherche (National Detective Agency) did not have this footage? According to Korver this reveals a problem. “The Rijksrecherche has made a compilation of images that is not correct.” the attorney said that he wants to add the new images to the dossier and he also wants the prosecution to further investigate the original image and sound files.

The court allowed Korver to add the material to the dossier, but it did not decide to postpone the trial.

Henriquez, 42, died in 2015 after he had been arrested in a brutal manner by five police officers at the Parkpop festival. Before his arrest Henriquez shouted that he had a gun.

The Public Prosecutor decided to prosecute two of the five police officers. They are on trial for causing grievous bodily harm, resulting in death. But the officers could also be sentenced for manslaughter. The court is expected to rule on the case on November 20.

The Telegraaf reports that Henriquez initially walked away with his arm around a woman after police officers had ordered him to leave. But he walked back to the officers and told them for the second time that he had a weapon, caliber 52. The first times he laughed, but later not anymore. “He was so threatening that I really thought he had a firearm,” one of the officers stated in court.

One of the officers on trial said that he had never before encountered such a strong man. “This is going to be quite a job, I thought. With five officers we had trouble keeping him under control.” when the police wanted to arrest Henriquez, he refused to surrender. The five officers hit him, kicked his knee, used pepper spray on his eyes and applied the controversial choke hold.

When Henriquez was handcuffed, his resisted no longer. Worse, he hardly reacted anymore, not even to a pain pulse. Nevertheless the officers decided not to call an ambulance but to shove Henriquez into a police van. “The situation there was not safe, we had to leave, “ the officer motivated this decision.

Two of the five officers are on trial now. They are protected from view in a separate room in the courthouse. They are being identified as DH01 and DH02 and they are only visible for public prosecutors, the judges and their own attorneys. Their voices are being scrambled.

The attorney of the Henriquez family, Richard Korver, asked the court again to lift the anonymity of the two police officers, but the court rejected this request.

The trial was initially set to begin in April, but at the last moment it was postponed after the attorneys of the two officers presented a report from forensic doctor Kees Das. He concluded that Henriquez did not die due to the choke hold but to heart failure. This conclusion contradicts the findings of the Dutch Forensic Institute. The NFI concluded that Henriquez died from the police violence. He suffocated from the combination of the choke hold, a blow to his nose and the use of the pepper spray.

Henriquez death triggers violence for several days in the Schilderswijk in The Hague; police arrested 250 people during these riots.