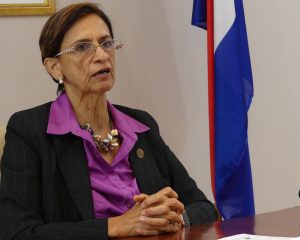 The liquidity position of Government.

The reserves of Government.

The commitments of Government for the remaining months of 2017.

“As President I convened this meeting due to the alarming signals coming from the community; USM, school boards, other creditors of Government. I wonder how secured salaries, payment to contractors, bus drivers, and other obligations of Government are at this time.”

Furthermore, what provisions have been made for the hastily called and not budgeted election in January, when our deficit according to the Finance Minister is over 100 million guilders in 2017 and over 200 million in 2018? Not to speak of what it would require for the constitutional entities such as the Central Voting Bureau and the Electoral Council to be up and running for this election.

I wish to remind the Government that budgetary amendments are the prerogative of Parliament and ministers can be held personally responsible for circumventing this law.

The budget right is one of the fundamental rights of Parliament and while due consideration must be given to the extraordinary circumstances following hurricane Irma, 2 months later it can be expected that Parliament will demand financial accountability.

The Minister of Finance has been invited for Monday, November 6th at 2:00PM.