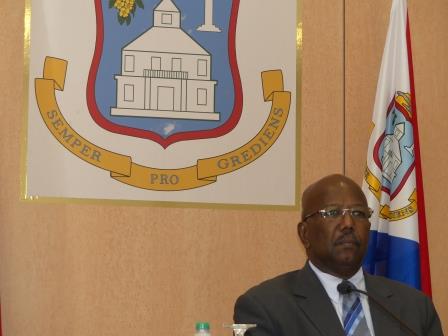 PHILIPSBURG- Prime Minister William Marlin stepped down on Friday afternoon, shortly after the Kingdom Council of Ministers had issued an instruction to Governor Holiday “to promote that the Prime Minister of St. Maarten is being fired and succeeded.” Vice Prime Minister Rafael Boasman will take over Marlin’s tasks.

Marlin said during a press conference in the Government Administration Building that he had made his position immediately available on November 2, the day when the Parliament passed a motion of no confidence against him and against five of his ministers. When his predecessor Marcel Gumbs was confronted with a motion of no confidence in 2015 he refused to submit his resignation, Marlin pointed out.

After the Parliament passed a second motion – the one that demanded his immediate departure – Marlin told the Governor that he saw no reason to resign again. “But the ranting and raving of politicians continued to get rid of William Marlin,” he said.

The Prime Minister did not refer to the Kingdom’s instruction to the Governor and said that he had planned to step down all along.

The day after the visit of King Willem-Alexander, Marlin said in the Council of Ministers that there was a conspiracy going on to bring down the government. The other ministers received this remark with skepticism.

During his visit to the Netherlands, Marlin said that he sensed from the line of questioning from three different Dutch media outlets that something was wrong. “It became clear to me that the Dutch wanted my government out of the way. The hurricane provided an opportunity to enforce the Integrity Chamber.”

Marlin got negative vibes from the Dutch media. “The questions were about corruption in St. Maarten and about the fear that money the Netherlands was to send for the reconstruction would disappear.”

Marlin also addressed accusations that he had not enforced the curfew after the hurricane. “That is not true. The curfew was not enforced due to a breakdown in communication between the police and the military. This also caused a delay in the transport of relief goods from the airport.”

Marlin said that he asked the Commander of the Marines several times to take care of the transport, but nothing happened. After he complained about this to the commander’s superiors in Curacao, said commander was removed from his post. “But I was asked to keep this quiet and William Marlin took all the blows.”

“Everybody was aware of the situation before the hurricane. There were 150 marines on the island. The police was in charge and the military would assist,” Marlin said. “Did they need a state of emergency to enforce the curfew or to stop the looting? Of course not.”

Marlin said, not for the first time, that the conspiracy to bring down his government was already underway long before Hurricane Irma hit the island on September 6. The game was “to demonize William Marlin” and to build a case to justify a motion of no confidence. “The rants and the questions in Parliament were unbelievable.” Marlin said, adding that in itself he does not have problems with criticism.

Marlin went down memory lane with an expose about the results of the 2014 elections and about the history of the elusive Integrity Chamber.

“I am not standing here to say goodbye. I am not leaving the political arena.” Marlin said. “I will be a candidate for the National Alliance during the February 26 elections and I will put my political fate in the hands of the population. History will show who misused the hurricane for political gain.”

Marlin said that he leaves a decent legacy behind. He claimed brokering the deal to obtain country status per 10-10-10, the occupation of the new government building, the enforcement of financial discipline, the presentation of successive balanced budgets and clearing up the debts previous governments built up during the first years of country status.

“I will leave this building today as the Prime Minister but not with my head down. I will hold my head up high,” Marlin said.