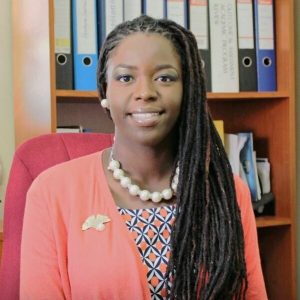 So began an email message to our newsdesk containing a 3-page scan of a resignation letter from Mrs Genève Phillip-Durham herself addressed to the board of USM. The resignation goes into immediate effect and reads as follows:

Dear esteemed members of the Board,

It is now approximately two years from the date I vividly recall receiving my letter of offer for the position of Dean of Academics at the University of St. Martin. It was a humbling and happy

moment to have been selected based on unanimous agreement at the Board level; from what must have been a large pool of qualified, experienced and competent individuals. What stood

out to me most in my offer letter, was the fact that I was appointed in spite of my “lack of experience” as relates to management at an institution of higher learning.

At the time, I felt that those simple three words would define what I did and how I did it, while serving not only as Dean of Academics but also as a member of the University’s Management Team. I felt accountable and I saw it as a reminder even before I assumed the position, that I was being relied upon to counter the idea of inexperience.

higher learning, the leadership and supervisory roles I took on during my academic and early professional career, were clearly articulated in my curriculum vitae, which perhaps conveyed to the hiring committee, my ability to be able to execute the job for which I was hired. In short, we both took a risk – you by hiring me with my lack of management experience in the sphere of educational administration; and me, accepting the offer in spite of having insufficient insight into the history of the institutional framework, management and leadership of USM.

That said, I remain eternally grateful and humbled for the opportunity I was given

to professionally contribute to an institution of higher learning within my own region.

However, it is with much regret that I must inform you that USM is not the right fit for me, particularly at this stage of my professional life and academic career. Whilst my goal and vision has always been and continues to be to contribute to the Caribbean region in the sphere of policy making, capacity building and education, I would do myself and any institution of which I am a part a disservice to remain, without being able to effectively, efficiently, openly and most importantly, objectively contribute.

During my tenure, I have witnessed quite a few good things at USM which are worthy of commendation. Most notable, is the loyalty of the members of staff, our precious students and committed faculty and the resilience of the 28 year old institution.

Unfortunately however, it is lamentable that in my opinion, the challenges have consistently outweighed the opportunities in such a historically important and relevant institution.

In my humble view, 21st century management requires innovative, proactive, creative and decisive leadership in order to successfully sustain an institution, especially one of higher learning. It should be noted however, that during my tenure at USM, there has been a proclivity to compromise all of the above in ways that were peculiar and puzzling.

Thus, it has become increasingly difficult for me to continue to function in an environment of instability and uncertainty, where principle, policy and practice are frequently inconsistent with each other.

At USM, I have seen decisions that could have been made in a few days, deliberated on for over one month and even one year without a final resolution. On the other hand, I have seen decisions that required year long deliberations and extensive consultations being made in one day or one week, in spite of the far reaching financial, human resource and social implications.

Added to such scenarios, I have had first hand experience which could be corroborated with historical records to validate the absence of a suitable employee retention strategy; especially at the management level. This has typically been compounded by passing of the buck and blame when employees voluntarily and

prematurely part ways with USM, the latter only to be unfairly criticized, berated and or villified upon their departure, rather than such incidence being used as an opportunity for reflection, introspection and correction.

Nonetheless, I continued to work diligently and professionally to execute my duties to the best of my ability. Overtime, it became apparent that short term, quick fix, piecemeal measures took priority over long term, strategic and structured decision making, which has only served to stymie the growth of the institution and personnel within the institution.

A management style which undermined open internal communication and was based upon a premise of unjustifyable mistrust, continued unabated, much to the frustration of myself and no doubt, those who were deserving and expectant of open and transparent, rather than clandestined operations of the management team.

I say all of this, not to be pessimistic or cynical but to be realistic and hopeful that in its quest to (re)gain the trust of the Sint Maarten community, the current and future leadership of USM would employ proactive, measured and consultative approaches, that would redound to the benefit of the institution and Sint Maarten community at large.

It is important for me to clearly and categorically point out my reason for tendering my resignation with immediate effect, not least because I want to ensure that my position is never misconstrued or misrepresented in private or public but because I truly want to be able to see institutions within my beloved Caribbean region taking ownership for institutional failures, blunders and incapacities and working toward structural fixes. This can only take place when the facades and charades are eradicated and we can finally and honestly take collective accountability and responsibility for the unfortunate realities with which we are confronted.

Though the tumultuous history of USM including but not limited to; the frequent oscillations in management can never be erased, this is the opportune moment to chart a new course for the future of the University – an opportunity which I am confident will not be missed.

I once again thank you for the opportunity and privilige to serve and I do hope that you would view my parting words of honesty, sincerity and candidness with an open mind.