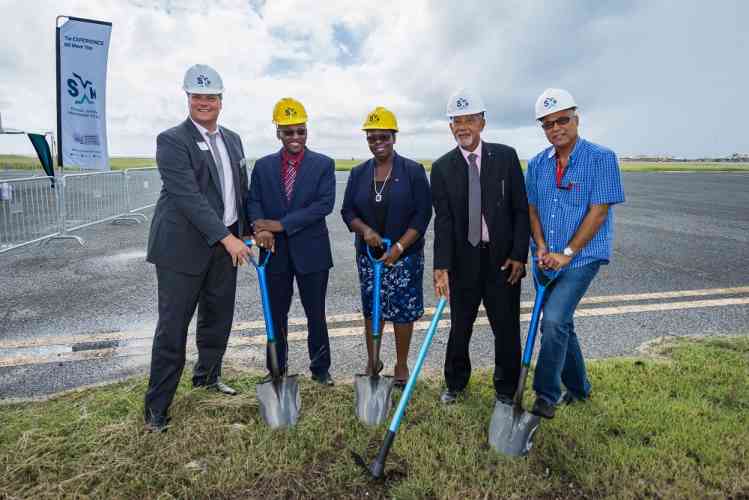 SIMPSON BAY – Minister of Tourism, Economic Affairs, Traffic and Telecommunication (TEATT), Mellissa Arrindell-Doncher did the honors on Friday with regards to the ground-breaking ceremony for the construction of the new Fixed Based Operator (FBO) facility at the Princess Juliana International Airport (SXM).

Congratulating the management and board of the airport both past and present for all their effort to get this very important project off the ground, the minister said, although the island is not at the moment “under the ideal circumstances and our beautiful airport still has some ways to go to regain its splendor, the ground-breaking of a new FBO facility is a positive and hopeful sign for the future of our international airport.”

Also speaking at the ceremony was Mr. Michel Hyman, COO and Acting CEO of SXM Airport who said “The new FBO facility for which we are breaking ground today forms a very important part of our Capital Improvement Program.” He recognized the hard work of “all those who went before me in preparing the ground work that has made this day possible.”

According to Hyman, “It is now going on to 30 years since the first call was made for an FBO facility at this airport. In fact, the growth of the General Aviation sector in pre-Irma St. Maarten has been such that we were ranked second only to The Bahamas in this region where it concerns accommodating luxury jets.

“Around this time of the year, we had all grown accustomed to seeing many of these private jets parked at our airport. As a matter of fact, in 2013 and 2014 we had to turn away about 70 and 60 requests respectively for such private jets to use our airport. Those aircrafts had to go to other airports, and once they find a new welcoming home, it usually becomes even more difficult to attract them to return to SXM.

Modernizing our FBO facility, therefore, will certainly offer a good incentive for them to come back,” he said. Hyman continued: “I must similarly say that the new facility is guaranteed the continued services of the two major FBO operators at SXM Airport, namely Arrindell by Signature and TLC with whom we have already signed non-exclusive agreements. The two operators will offer passenger, ground handling and into-plane fuel services for General Aviation from the new, state-of-the-art FBO Terminal when this is completed.”

He concluded by saying: “Today, we are taking what might seem like a small step for us at SXM Airport, but which, I am sure, will turn out to be a giant step for all of St. Maarten and our hub partners, as we seek to regain and even surpass our market share in the General Aviation sector.”

Also attending the ceremony were representatives of the Supervisory Board of Directors of PJIAE N.V., the St. Maarten Tourist Bureau, Arrindell Aviation by Signature, TLC Execujet, Studio Acht and of Taliesen Construction.

MP Wescot: “Kingdom Charter renewal is a priority and the focus must be...

January 26, 2023
0
PHILIPSBURG:--- Member of Parliament, Sarah Wescot-Williams, in her capacity of leader of the Democratic Party on Sunday gave a sneak view of the party’s...
Local News

January 26, 2023
0
PHILIPSBURG:--- Member of Parliament, Sarah Wescot-Williams, in her capacity of leader of the Democratic Party on Sunday gave a sneak view of the party’s... 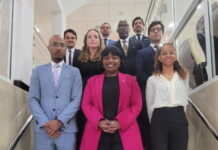