Home Local News The election that nobody wanted is here 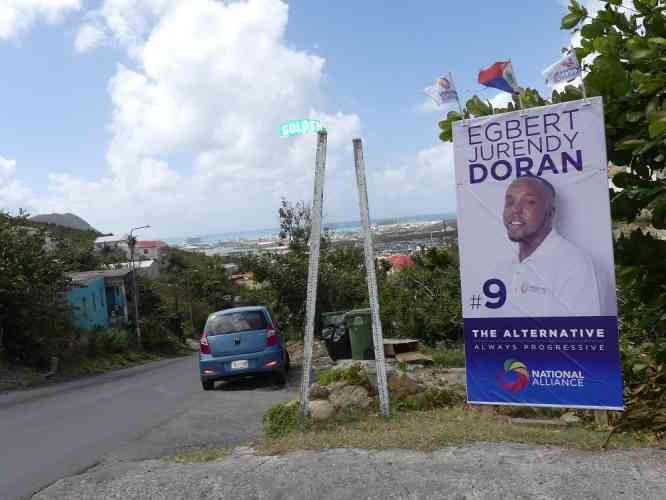 PHILIPSBURG –  The elections that nobody wanted will take place on Monday in St. Maarten and for the first time ever there does not seem to be a lot of election fever. The election campaign has been limited to some public meetings and to social media announcements and almost everyone refrained from littering the island with campaign bill boards.

Almost, because National Alliance candidate number 9, Egbert Jurendy Doran put up two billboards and United Democrats candidate number 18, Luc Mercelina (Passionate about medicine) put  up just one near a place he knows best: the hospital. Some other candidates advertised on electronic billboards

The absence of election bill boards and party flags along the public roads have two possible explanations. One: politicians are afraid of a backlash from the electorate for wasting money on this in the post Hurricane Irma era. Two: political parties and individual politicians do not have the money for this, because their backers are struggling to get back on their feet themselves after the hurricane.

Interestingly, the two major parties, UD and NA have not published a political manifesto as they were supposed to do. Other parties, with the exception of the Christian party, published their manifestos very late. All this makes the objectives of the parties and their individual candidates beyond vague.

Not everybody wants to believe that this has to do with the way former Prime Minister William Marlin has handled his affairs after Hurricane Irma. His stubborn resistance to Dutch conditions for financial aid – the establishment of an Integrity Chamber and deployment of Marechaussees and Dutch customs officers to strengthen border control – was reason for the Democratic Party (DP) to step out of the coalition with Marlin’s National Alliance (NA) and the United St. Maarten party (USp).

To get a majority of eight, DP and UP lured USp-MP Chanel Brownbill to their side.

When Parliament hit the Marlin-government with a motion of no confidence on November 2, the Prime Minister hit back: he dissolved the Parliament. This situation also occurred in 2015, when the Gumbs government was sent home.

The new majority said there was no need for elections because it was prepared to form a new government, but to no avail. And whether the discussion to dissolve the Parliament was right or wrong does not matter anymore: the elections are here and everybody will duly go to the polls on Monday – or not.

These elections will give some indication of how many people left the island after Hurricane Irma. There are 22,559 registered voters but nobody knows how many of them are really on the island.

The odd one out this time is the USp. It lost some of its major vote getters – in particular Silvio Matser and Chanel Brownbill – and the remaining 2016 candidates were good for only 1,226 votes.

Add to this that party-leader Frans Richardson was just released from pre-trial detention on Friday – he is suspected of accepting $370,000 in bribes, vote buying in 2016 and tax fraud – and the chances of this party look pretty bleak.

The other players – St. Maarten Christian Party, St. Maarten Development Movement and People’s Progressive Alliance – will at best play a marginal role in these elections.

The observers – D66-leader Alexander Pechtold, Socialist Party senator Meta Meijer and representatives from the Organization of American States, the International Foundation for Electoral Systems and the census offices of Curacao and Aruba – will not make much of a difference if the only thing they do is writing reports about what they have observed.

That’s too little too late, you hear in the streets of Philipsburg: if those observers don’t act as a deterrence against election fraud their presence makes little sense.

Photo caption: Egbert Jurendy Doran is one of only two candidates who dares placing an election billboard along the public road. Photo Hilbert Haar.