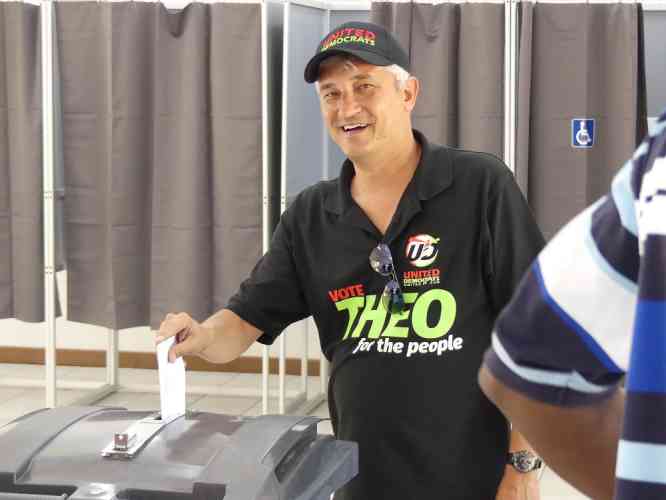 PHILIPSBURG – The United Democrats have won the parliamentary elections but not by the landslide the party was aiming for. The preliminary results give the UD 7 seats. One short of a majority; the National Alliance did surprisingly well, winning 5 seats. The embattled United St. Maarten party claimed 2 seats and the St. Maarten Christian party 1.

While the counting of the votes per candidates was still underway at 2 a.m., it seems certain that the following UD-candidates have won a seat in parliament: Theo Heyliger, Sarah Wescot-Williams, Franklin Meyers, Emil Lee, Sidharth Bijlani, Luc Mercelina and Perry Geerlings. Chanel Brownbill, Claret Connor and Tamara Leonard will lose their seat, unless they manage to close the gap with the seventh-ranked candidate, Perry Geerlings with votes coming in from the remaining four districts. If Lee remains as Minister of Public health and Wescot-Williams becomes the next prime minister, there are still options for the candidates that now fall just short of a seat.

With the votes for four districts still being counted, the race for the two seats of the United St. Maarten party is still wide open. Embattled party leader Frans Richardson leads the dance with a narrow margin over the evenly embattled interim director of the Tourist Bureau, Rolando Brison and a bit further out, the party’s number 3 candidate, Maria Buncamper-Molanus. USp’s number two, former minister Mellissa Arrindell-Doncher, does not stand a chance of getting a seat.

USp-MP Silvio Mater will disappear from parliament – he did not run in this election – and the candidate that held the third seat, Chanel Brownbill seems out of luck with his new party UD,

The seat for the St. Maarten Christian Party goes to party leader Wycliffe Smith. If the SMCP becomes part of a coalition with the UD and Smith takes up a position in the next cabinet, Claude Peterson will get the seat in parliament.

UD-leader Theo Heyliger said yesterday that he has two priorities for the coming years: kick-starting the economy and housing projects for the people.

While the UD had hoped to win an outright majority in parliament, it is now condemned to find a suitable coalition partner. Given the recent history between the UD and the National Alliance, that combination seems out of the question. A coalition with the USp seems also questionable, given the legal troubles of party leader Frans Richardson, the shady history of his now number two Rolando Brison and the criminal conviction Maria Buncamper-Molanus has to her name for tax fraud. That leaves Wycliffe Smith’s Christian Party as the most likely coalition partner.