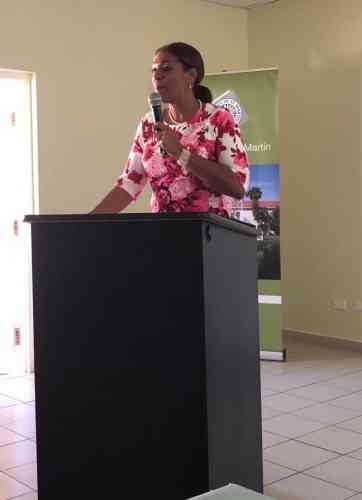 PHILIPSBURG – On Monday, January 15th, almost immediately after the new Minister of Education, Culture, Youth and Sport, Jorien Wuite, was sworn in, the Minister and members of her cabinet attended a stakeholder consultation session at the University of St. Martin (USM) regarding the Ministry’s Resilience Plan (MRP).

The plan, formulated in collaboration with UNICEF representatives, MECYS Policy department heads and the policy advisor of staff bureau in response to the devastation caused by hurricane IRMA, has as its main objectives: to establish a foundation for a sustainable recovery plan and to improve disaster responsiveness before, during and after disasters in the education, culture, youth and sport sector.

This meeting was the second stakeholder session as a follow up to an initial inter-sector consultation session in October 2017. At Monday’s session, the Minister provided a brief overview of the completed plan and a dialogue quickly ensued amongst the audience which included vital stakeholders from a cross-section of school boards, culture and sports organizations and youth representatives.

The Minister encouraged the stakeholders to prioritize projects that needed to be developed immediately to ensure that the opportunity of funding to the World Bank can be considered. She also urged the stakeholders to partner with the Ministry and focus on being efficient and effective in the planning and executing of these vital projects with a focus on social economic recovery.

With damages to the Ministry’s assets estimated at a value of fifty million US dollars, a special focus on being efficient and effective with resources is of paramount importance to Minister Wuite.