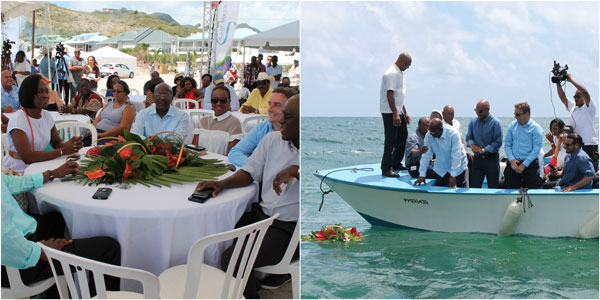 Cul de Sac:— Residents from Dutch side including Prime Minister William Marlin, Minister Silveria Jacobs and several others joined the newly elected government headed by President Daniel Gibbs to remember the fishermen on St. Martin.
President Gibbs said that the occasion is one that was put together to give the people the opportunity to socialize but at the same time remember and cherish the island’s culture.
President Gibbs called on the young people to take up the task to continue what the older generation left behind and to also open their own businesses he works on reconstructing the economy on the French side.
After the official speech given by the President of the COM Prime Minister William Marlin joined President Gibbes on a boat to lay a wreath in the sea in memory of all the fishermen that has passed on.