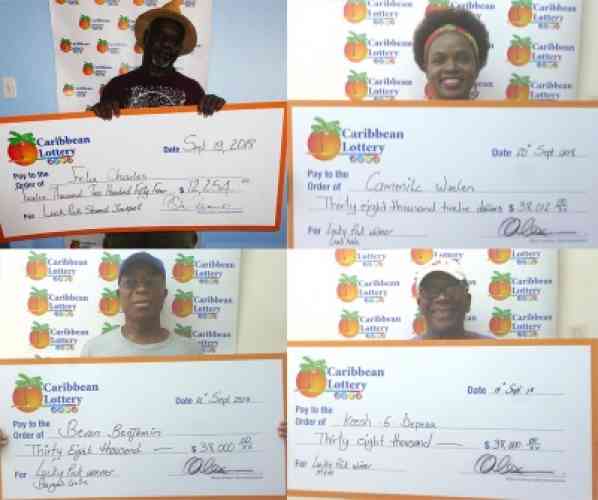 PHILIPSBURG:— Not one, not two, not three, but four Lucky Pick jackpot winners made history – all on the same day – recently. The magic date was 18th September, 2018, when one lucky player from St. Maarten and three players from Antigua & Barbuda came up with winning tickets, totaling EC$152,000.

“This is an amazing quadruple win! It’s quite remarkable,” enthused Paula Williams, Site Operations Manager at Caribbean Lottery. “September 18 will remain as a historic date in the Caribbean Lottery calendar. We warmly congratulate all the winners, and hope that they will enjoy the benefits with their families to the fullest.”

Mr. Felix Charles, the ecstatic winner from St. Maarten, expressed his excitement and happiness at his win, and confirmed that he will continue playing, as he has done since 2014. Charles, a dedicated Lucky Pick Player, has won smaller amounts in the past. “This win will allow me to pay my outstanding bills,” noted the 65-year-old father of “three grown children.”

While over in Antigua and Barbuda, Mrs Cammile Alder-Waelen couldn’t contain her excitement. “When I saw the numbers and realized I had won, I cried Amen!” laughed the 35-year-old mother of five.

She plans to use the money to support her daughter’s college tuition costs in the United Kingdom. However, despite the demands of her large family (her children are aged 19, 17, 10, 4 and 3 months) she also intends to save some money to enjoy for herself.

Mr. Keesh G. Depeza says “I feel good about my win,” adding “It’s already in a savings account in the bank.” The 71-year-old Antigua & Barbuda native has been playing Lucky Pick “for a long time,” he says.

Mr. Bevon Benjamin is the third Antiguan winner of the Pick 4 jackpot. The 67-year-old father of four says he will use his win to pay the bills, and to save.

What advice would the four happy winners give to other players? All four share Mr. Felix Charles’ words: “Keep on playing. You never know when your time will come!”

Scooter accident in Orient Bay claims another life | THE...