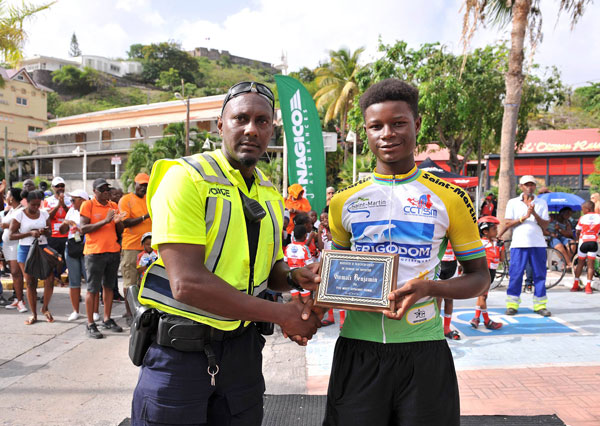 PHILIPSBURG:— The 5TH edition of the NAGICO to NAGICO cycling race is being dubbed a huge success by participants and spectators who experienced an exciting, fulfilled and incident free competition which spanned over the course of the entire weekend.

“This has been another successful edition for us, which attracted hundreds of cycling enthusiasts from both sides of the island,” Marketing Manager Lisa Brown said. “We were very pleased with the number of people that came out on all three days to support the event, but most of all we are thankful that we are able to boast the culmination of another safe event and for this we applaud the members of the emergency services, who through their expert planning and coordination were able to execute a safe and seamless operation which ensured the safety of the riders and the road users from border to border.”

This year’s races recorded more than 50 professional riders locally and from French territories including Guadeloupe, Martinique & France and surrounding islands like Anguilla.

Despite the intense heat brought on by weather conditions, the spirit of the supporters was not dampened as they followed the race, setting up cheer points at various locations of the route.

“Everyone is excited and already talking about next year’s edition as we see where the NAGICO to NAGICO race and cycling on the island sport is growing each year,” Brown said. “Already we have been approached with ideas from patrons on how to put a twist on the event for 2018 and internally our planning for 2018 will be commencing.”

One of the most memorable aspects of the race this year is that it helped to unify both the French and the Dutch as one people. At the opening ceremony on Friday night at the Simpson Bay Cause Way Bridge, the newly elected First Vice – President of the Collectivite, Valerie Damaseau officially opened the event and on Sunday members of the Sint Maarten Police Force participated in the prize giving ceremony held in Marigot, by presenting the Gamali Benjamin Award to the most Dynamic Rider of the event, Rene Arrondell.

“These are ways and examples of how sports can be used as a unifying thread to bring people from all culture and nationalities together as one and NAGICO is proud to be part of that.” Brown said.