Home Local News A Tropical Storm Watch is in effect For St. Maarten, Isaac Is... 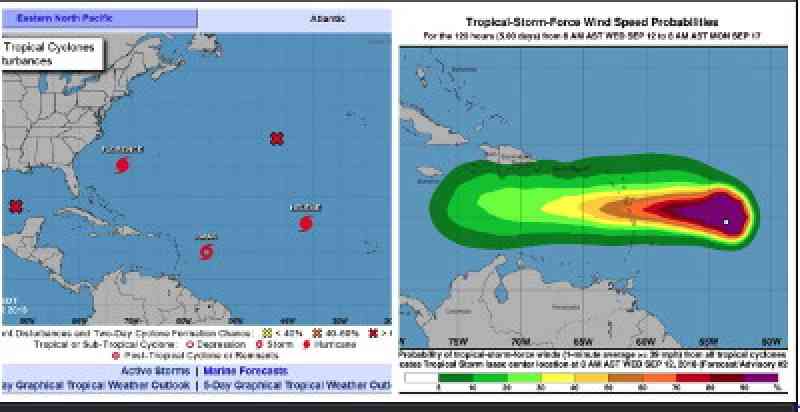 PHILIPSBURG:— St. Maarten is currently under Tropical Storm watch as TS Isaac approaches the island.
A press release from the Meteorological Department states that TS Isaac was located at Lat: 15.1 North and Log: 55.7 W about 530 miles ESE of St. Maarten.

Isaac Is Moving Faster Toward The West, Near 21 Mph (33 Km/H). This General Motion With Some Decrease In forwarding Speed Is Expected To Continue Through The Weekend.

On This Forecast Track, Isaac Is Expected To Move Across The Lesser Antilles And Into The Caribbean Sea On Thursday

Tropical Storm Force Winds Extend Outward Up To 175 Miles From The Center. The Estimated Minimum Central Pressure Is 1000 Mb…29.53 Inches.

POTENTIAL IMPACTS:
Based on the above information, the expected impacts on St. Maarten are as follows:

Seas: Sea conditions will begin to deteriorate tonight with waves peaking near 8ft and will further deteriorate Thursday through Friday up to 10 feet or more. Some coastal flooding is possible as the surge will be accompanied by large waves. The necessary precaution should be taken to protect life and property along the coast.

Winds: Winds are expected to increase later this afternoon up 20kts (25mph) and from Thursday through Friday up to 35kts (40mph) with higher gusts. Winds that may make using an umbrella difficult and cause twigs to break off trees lose light object could be blown away.

Rainfall: Rainfall accumulation of less than 2 inches is expected over St. Maarten in association with Isaac. Occasional showers are expected for the rest of today as an outer band from the system moves across the island chain. Isolated showers and possible thunderstorms can be expected over our local area Thursday and Friday as Isaac makes its way into the Caribbean Sea. Some of these showers may be heavy and may cause minor flooding in areas prone to flooding.

A Tropical Storm Watch means that tropical storm conditions are possible within the watch area, in this case within 24 hours.

Because Isaac is a weak system there is a certain degree of uncertainty with the forecast. It is likely that as the system draws closer to the islands the track and intensity may change. Therefore it is important to keep updated and alert.

May 20, 2022
0
PHILIPSBURG:--- Sharon Filico one of the three Mitte suspects who was arrested on Wednesday 11th May 2022 was released on Thursday after a lengthy...