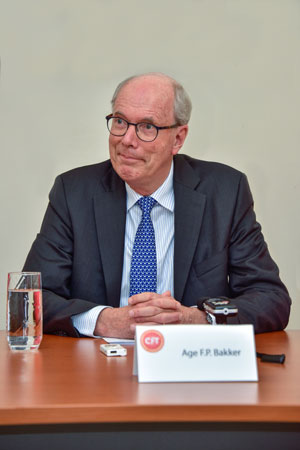 Oranjestad:— During the visit of the Board of financial supervision of Bonaire, Sint Eustatius and Saba (Cft) to Sint Eustatius, the Executive Council explained in detail the decisions that have been taken to structurally address the capacity problems of the Finance department. The Executive Council is planning to contract an outside firm to not only conduct the financial accounting but also to provide training to the department’s personnel. Chairman Age Bakker: “For a long time Cft has been calling attention to this problem. Now it seems that serious attempts are being made to reach a solution”.

During its visit on March 28 and 29, the Board met with the Executive Council and the Island Council of Sint Eustatius. The structural reinforcement of the Finance department was one of the main topics of discussion. The Executive Council pointed out its choice for an approach whereby employees will be coached and trained, whilst simultaneously the current situation will be taken care of on a going concern basis. Cft has confirmed to endorse this approach. The need for reinforcement is considerable: Sint Eustatius is not yet able to conduct a timely and qualitatively suitable financial accounting.

In addition to the strengthening of the Finance department, the budget and accounting process on Sint Eustatius were discussed as well. “Compliance with reporting obligations still does not occur in a timely manner,” the Cft Chairman declared. The 2015 financial statements and the fourth progress report of 2016 have yet to be completed. He continued stressing the importance of these reports for both the Executive Council and the Island Council, since they allow the Councils to gain insight and to be able to fulfill their executive and supervisory role in and adequate way.

Budget execution
The audit of the 2015 financial statements has encountered substantial delays. The year 2015 is expected to close with a deficit of approximately USD 0.6 million, which will be offset in the 2017 budget. Since the audit has not been completed yet, the final result for 2015 may still vary.

Over the year 2016 Sint Eustatius expects a positive result of approximately USD 0.5 million, with which a previous deficit of 2014 with the same size will be compensated.

As for the 2017 budget, the Minister of BZK (Interior Affairs and Kingdom Relations) has withheld its approval last December. At present a revised 2017 budget is being prepared, in which the recommendations mentioned in the previous Cft advice will be taken into account. It is of vital importance that the agreement with NuStar is swiftly completed in a satisfactory way, so as to provide for a balanced budget in 2017 and making it possible to finance the outsourcing of the financial accounting.