AIRPORT:— The Princess Juliana International Airport (PJIAE) is set to start operations as of October 6th 2017. According to information provided to SMN News management of PJIAE has decided to open for commercial flights for all airlines that want to resume flying to St. Maarten.
While PJIAE will resume operation, the terminal building will remain closed as the entire roof of PJIAE terminal building has to change. SMN News understands that PJIAE suffered over $100M in damages and the repairs to the roof has not yet begun. It is further understood that the damage assessment is not yet completed neither can the bidding for the roof repairs begin. SMN News learned that PJAIE building was flooded during the passing of hurricane Irma and Maria and each time rain falls the airport terminal building is drenched with water.
Concessionaries at PJIAE are up in arms because they claim that while PJIAE building is fully insured, they have no private insurance for their merchandize. Reliable information reaching SMN News states that the concessionaries are claiming that while members of the public are not allowed to enter PJIAE premises they are losing merchandize. They alleged that even liquor is being stolen from the liquor store and believed that these merchandize are stolen by the marines that are currently occupying the airport.
Another hindrance is the lack of information to the concessionaires who chose to keep their merchandize in the damaged terminal building and to date have not taken the necessary precautions to remove their merchandize from the badly damaged terminal building. Efforts made to reach PJIAE management on Thursday has proved futile however, SMN News learned that management of PJIAE met with the Council of Ministers on Thursday to fully update them on their plans to reopen on October 6th.

September 25, 2022
0
PHILIPSBURG:--- Last Friday, September 23, 2022, KPSM's management team hosted a meeting with  French side counterparts at the police station in Phillipsburg. During the meeting, several points were discussed with the French side police leadership. Namely: Working together from the New...
Read more 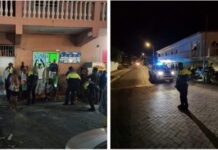 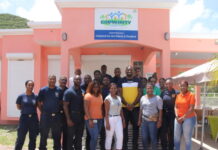