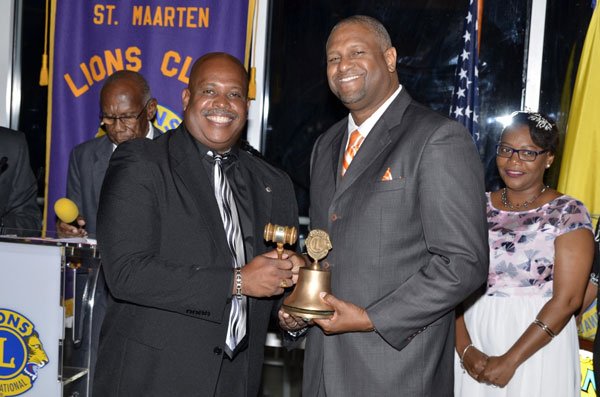 The outgoing President Lion Davey mentioned his long list accomplishments to the crowd of Lions, partners in service and families at the dinner which was also attended by Honorable Minister of Justice Mr. Rafael Boasman, who is also a long serving Lions member.
Minister Boasman gave a speech about how proud he felt being a Lion, congratulated the club on its many achievements and gave a toast to Lions Club International, District 60B, and the St. Maarten Lions Club. Zone 2B Chairlady Lion Ernie Hodge-Carty from Anguilla also attended the event along with the President and members of the three French Lions Clubs, Lions Club Oualichi, Doyene and Fort Louis.

Club President Lion Davey Woods stated, “It was a pleasure to serve as President of such prestigious Lions Club while also serving the St. Maarten community. I received great support from my board and general membership. Apart from the Signature Project, we have accomplished everything else that I have set out to do from the start of the year and much more”.

Incoming President Lion Alison said, “My focus will be on our young people on St.Maarten especially with drug and alcohol abuse and we will be going back into the various communities to see where help is needed. The St. Maarten Lions Club wants to serve it’s communities and by going into those communities it can get a good assessment of what the community needs are”.

The night was capped off with the outgoing President giving out various plaques to deserving members of the club while various speeches were given concerning the 100th-anniversary celebration followed by a buffet dinner.