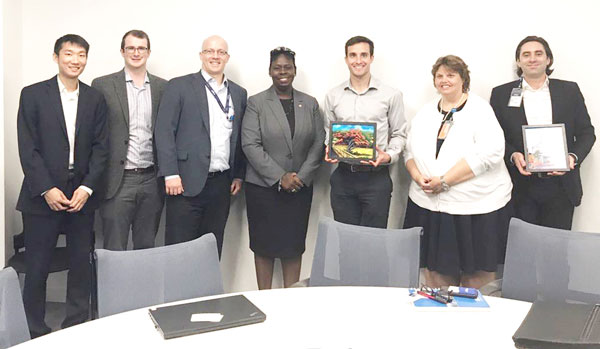 PHILIPSBURG:— Minister of Tourism Mellissa Arrindell-Doncher recently held what she termed “extremely fruitful” follow-up discussions with officials of JetBlue airline to secure a new Fort Lauderdale-St. Maarten route. Initial discussions started earlier this year and the Minister used the opportunity to bring the flight closer to reality during her visit to New York last week to attend Caribbean Week hosted by the Caribbean Tourism Organization.

JetBlue officials told the Minister that they have completed their market research on the route and recognizes its enormous potential. The target date to kick off the service is towards the end of this year, but this could possibly stretch into 2018. The decision about the route will come in the next few weeks.

The discussions in New York were extensive and touched on various issues including St. Maarten’s hotel inventory, incentives towards the airline, JetBlue Vacations, the number of times a week for the scheduled flight ect.

“We are working diligently to secure more airlift for St. Maarten to key markets and destinations. JetBlue SXM-Fort Lauderdale is route we have always targeted and will compliment some other initiatives we are working on. The discussions were very positive and we look forward to finalizing very soon,” the Minister said.

Fort Lauderdale represents about 15% of JetBlue’s capacity, it’s the largest airline at that airport. The airline recently said that even though competition may be rising, JetBlue sees South Florida as a “large underserved market” with more expansion capabilities. JetBlue plans to continue to “grow thoughtfully” in the market,” the airline said.

JetBlue also plans to roll out its Mint service (similar to first class) at Fort Lauderdale later this year. In other markets, the introduction of Mint service has led to improved profitability. Mint service was also discussed with the Minister in New York.

The Minister was joined in New York by members of her Cabinet, Head of the St. Maarten Tourist Bureau Rolando Brison and St. Maarten’s marketing firm for the US, MMGY Global/Spring O’Brien, whose representatives attended the meeting to familiarize themselves with the initiatives/wishes of St. Maarten and JetBlue.