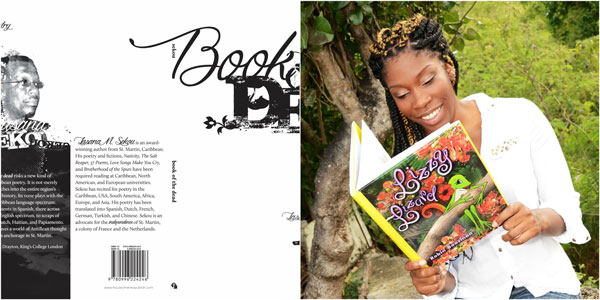 GREAT BAY:—“Exciting reading happens in March and February for International Women’s Day and Black History Month. Early in the year I’m also very curious about the performance of books published in St. Martin” by House of Nehesi Publishers (HNP), said Jacqueline Sample, president of HNP.
Libraries, book distributors, and bookstores may provide some objective information about the performance of books. Philipsburg Jubilee Library (PJL) has a list of HNP books checked out by library customers from 2014 to 2016. “Lizzy Lizard was checked out the most among the 12 HNP titles that were borrowed a number of times from PJL in 2016,” said Sample.
Lizzy Lizard by Robin Boasman was taken out 20 times in 2016, outstretching other HNP books by at least 10 points. The children’s book is a consecutive high performer, since 2014.
Following the adventurous lizard on the most recent checkout list was Claude – A Portrait of Power by Fabian Adekunle Badejo. Claude had been in a dead heat tie with Lizzy Lizard and Cul-de-Sac People by Mathias S. Voges on the 2014 list, said Sample.
Ranking third at the library checkout in 2016 was also a tie, Language, Culture, and Identity in St. Martin by Rhoda Arrindell and the Barbadian shorts stories Same Sea … Another Wave by Cynthia Wilson. The 1999 booklet Big Up St. Martin: Essay & Poem by Lasana M. Sekou followed both, said Sample. Tied at fifth place for HNP books taken home from PJL in 2016 were Cul-de-sac People and St. Martin Massive! A Snapshot of Popular Artists.
The checkout list shows one aspect of how library books are used by the public, said the St. Martin publisher. “It does not account for HNP books used for homework, research, or pleasurable reading at PJL but not taken home. The Mediatheque checkout list would also have to be obtained for an idea of how HNP books perform island-wide in this aspect,” said Sample.
Further afield and before February 2017 got underway, the California-based Small Press Distribution (SPD) had placed Book of the Dead by Lasana Sekou on its widely promoted Black History Month reading list. Book of the Dead is the St. Martin writer’s newest poetry collection.
“This 2017 booklist at SPDbooks.org is lengthy. Its USA-wide reach is exciting. SPD had already shown a liking for Book of the Dead in a Twitter choice of 10 books in mid-2016. To have a book selected this way by a major US indie distributor is also encouraging for HNP, for St. Martin literature, and for writers who publish in the Caribbean. Hopefully it encourages aspiring writers in our region not to give up on their dreams or options of getting published,” said Sample.
But more than one HNP book and author “started out busy in 2017,” said Sample. Tishani Doshi has participated in dynamic literary festivals in Asia. There is news of new positions, staging of literary works, reviews, new books, and awards for writers such as Marion Bethel (The Bahamas), Amiri Baraka (USA), Kamau Brathwaite (Barbados), Emilio Jorge Rodriguez (Cuba), Charles Matz (USA), and Patricia Turnbull (VI), said Sample.

January 17, 2021
0
PHILIPSBURG (DCOMM):--- The Collective Prevention Services (CPS), a department in the Ministry of Public Health, Social Development and Labour (Ministry VSA), that effective January 18, all Baby Clinic Services will be temporarily suspended for the next two weeks and...
Read more