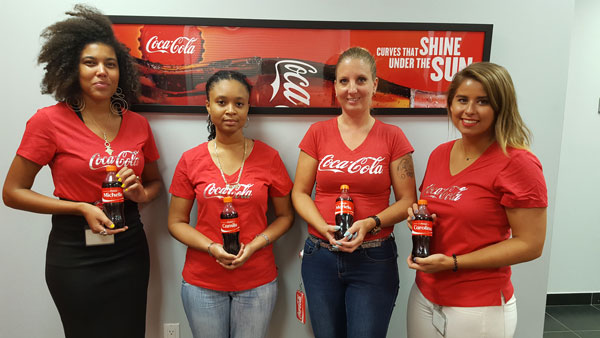 Cay Hill:— CC1 St. Maarten, the exclusive distributor of Coca-Cola®, the world’s number one beverage, Ever since the “Share a Coke” campaign returned to the U.S. in May 2014, thirsty fans across the U.S. have been clamoring to find their names on bottles of Coca-Cola, Diet Coke or Coke Zero. Some have struck gold, while others have left the store empty-handed. The popularity of the campaign was incredible and it became one of our most beloved and successful campaigns to date with 150 million personalized bottles sold worldwide.

“Share a Coke” is the campaign this summer with more names as well as new names and flavor choices than ever. The campaign reminds fans that nothing beats the summer heat like an ice-cold, delicious Coca-Cola. Starting this month, 16-oz., 175lt bottles and 12oz cans of Coca-Cola, Diet Coke and Coke Zero will be available at your local supermarket with more than 200 first and 140 last names are available this summer.

Is your name not available? Or would you like it customized? CC1 St. Maarten will be announcing various locations throughout the summer where you can get your 16oz bottle personalized with your own name, nickname or last name.
From proms to graduations, family reunions to weddings, the ways to share an ice-cold Coca-Cola with family, friends and party guests this summer are limitless.

Unfortunately, last names and first names will not appear on the same bottles. Consumers can, however, search for separate bottles to complete their full name. So some labels will include surnames like Delgado or Martinez, while others will carry monikers like Carlos, Dylan, and Steven. “Last names give us an opportunity to invite more people into the campaign,” Coca-Cola Trade Marketing Coordinator Agnetha Huijting said. “It’s just a great way to increase the connection with our loyal consumers.”

The brand will also look to connect with consumers at events like family reunions, weddings, birthdays, and other occasions where people get together to share and celebrate life, she added. While the names will appear at random in retail, people can make personalized orders at CC1 St. Maarten. The program will run from July through October or as long as stocks last.
Coke first launched “Share a Coke” in Australia in 2011. It came to the U.S. in 2014 and proved to be a hit. Coke began in 2014 with the 250 most popular names among teens and millennials. This year, the larger number of first names will cover more than 77% of the general population in Puerto Rico of people ages 13-to-34, according to the brand.

The popularity of this campaign proves that simple marketing ideas are often the best ideas. By adding first names on packages, Coke is tapping into a thirst for personalization.There is vanity appeal, for sure; everyone loves to see their own name in print, anywhere. Even on their favorite soda bottle. People don’t just seek out their own names, they also look for the names of friends and family, General Manager of CC1 Mr. Dominique De Tullio said. “It is a small gift that says “I was thinking of you!”.

CC1 St.Maarten is one of the largest distributors in St. Maarten and currently sells some of the top brands in the market, such as Coca-Cola, Sprite, Dasani, Canada Dry, Evian, Volvic, Badoit ,Corona Extra, Presidente, Stella Artois, Leffe, Hoegaarden, and Budweiser, among others.

June 23, 2022
0
PHILIPSBURG (DCOMM):--- The Ministry of Education, Culture, Youth and Sport (MECYS) will be hosting the Third Caribbean Safe School Initiative (CSSI) Ministerial Forum from June 28 – 30, 2022.This event was originally planned for 2021, but due to developments...
Read more