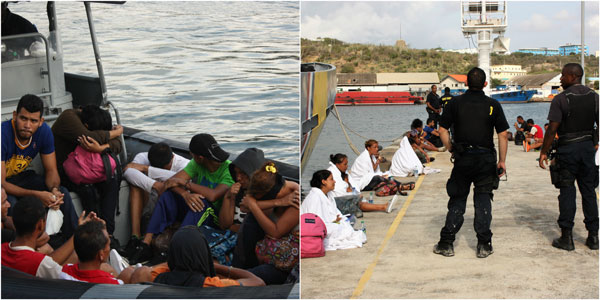 Willemstad, CURACAO:– On  Friday, May 12th, The Dutch Caribbean Coastguard (DCCG) detained twenty-six (26) undocumented persons on Klein Curacao. The day before that, another three were also detained.

In a well-coordinated action of the Dutch Caribbean Coastguard, with Super-RHIB and Jet-Ski in the water and Dash-8 and the helicopter in the air, a total of twenty-nine documented persons with the Venezuelan nationality were detained. This action has been going on for several days and nights and resulted in the arrest of these twenty-nine people. With actions such as these, the Coast Guard crew must always be alert, as illegal weapons and drugs are often found. Two Super-RHIB units of the Coast Guard Substation Curaçao have been deployed to transport the people to the sub-station in Parera. There, they were attended by the Coast Guard where they first received something to eat and drink, but also blankets and clothes as they showed dehydration symptoms. Afterward, they were transferred to the Police that is investigating the case together with the Coast Guard.