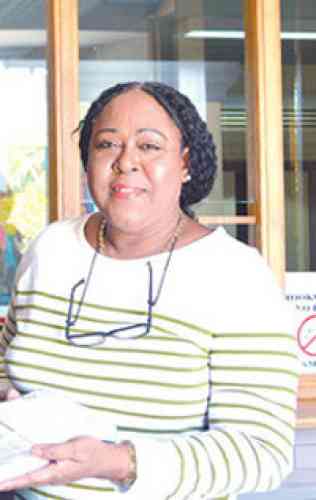 PHILIPSBURG:— The main suspect in the Triggerfish investigation Maritsa James Christina who was arrested on September 7th, 2018 will have to spend another 60 days in pretrial detention as the Prosecution prepares to take her case to trial. SMN News learned that the Attorney for James Christina pleaded with the courts to release her client but the Judge denied the request.
James Christina worked at the Court of First Instance for a number of years. According to information, SMN News obtained James Christina held her first job at the Court House and worked her way up to become the Manager of the Court House on St. Maarten.
The Prosecution alleged that James Christina is suspected of having embezzled sums of money from the bank accounts of the Sint Maarten branch of the Joint Court of Justice of Aruba, Curaçao, Sint Maarten and of Bonaire, Sint Eustatius and Saba over an extended period of time. The suspect had access to these accounts by means of her position. Shortly after her arrest detectives conducted a house search where James Christina and her husband were staying since her home suffered extensive damages during the passing of hurricane Irma on September 6th, 2017. James Christina is represented by Attorney at Law Zylena Barry.

The Prosecutor’s Office confirmed that James Christina was taken to court on Monday and her time has been extended.

June 22, 2021
0
Why is it that every time the SXM Government finds itself in financial difficulties, that the first set of people to be affected are...

June 22, 2021
0
PHILIPSBURG:— Sint Maarten National Commission for UNESCO has partnered with the Funtopia Youth Initiative Foundation to launch the pilot afterschool program for introducing the Art of Stilt walking and Moko Jumbie culture in primary schools as an extra-curricular activity....
Read more

June 22, 2021
0
PHILIPSBURG:— Sint Maarten National Commission for UNESCO has partnered with the Funtopia Youth Initiative Foundation to launch the pilot afterschool program for introducing the...

June 21, 2021
0
PHILIPSBURG:— The Minister of Public Health, Social Development, and Labor, Omar Ottley has recently signed off on draft legislation that will allow for measures...

June 21, 2021
0
PHILIPSBURG:— The Minister of Public Health, Social Development, and Labor, Omar Ottley has recently signed off on draft legislation that will allow for measures...

Whale and dolphin research expedition in the Caribbean. | SMN...