Home Headlines & Top Stories Dump Fires have the attention of Council of Ministers — Government is... 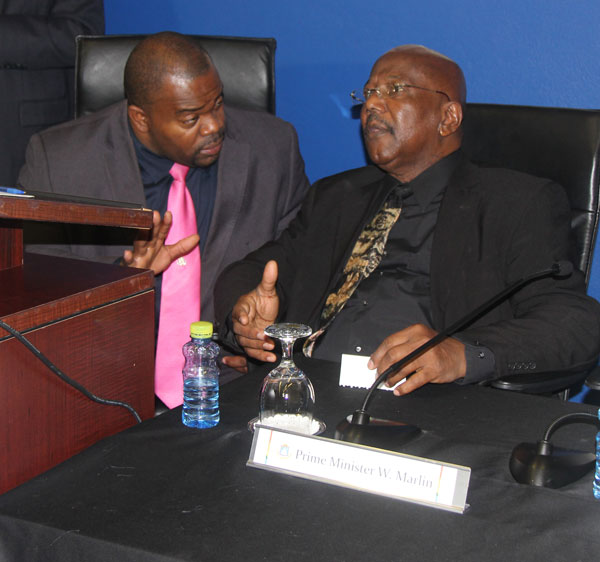 I will not react each time the dump is on fire, but instead, I am doing what other Ministers did not do when they were in office.

PHILIPSBURG: — Prime Minister William Marlin told reporters on Wednesday at the Council of Ministers press briefing that the fires on the Dump have the full attention of the government. Marlin said one or two of the fires were set on purpose which is now being investigated by the Ministry of VROMI. Marlin said that the dump has priority for government and it’s even in their governing program.

Marlin further explained that the entire Council of Ministers will be touring the dumpsite. He said that while the current Minister is being criticized for the dump fires, even though the dump is older than the Minister of VROMI. Marlin said his government had done everything in the past to protect the pond in 1997 which also gave them a 10 year period to find a proper solution. He said that 20 years later the situation remains the same and even if an agreement is signed today for a waste to management facility, it will take about 3 years before the construction of the facility is completed. Marlin said the Minister has been working on a structural solution, he called on the people to begin recycling their garbage. Further to that Marlin said that garbage from the cruise ships, even from the French side is dumped on the dump on Pond Island. He said the challenge is a lot, but the government is not shying away from the situation.

Marlin said while the Minister criticized the dump and roads while being a Member of Parliament, ever since he took office the Minister have been working on the things he criticized such as the roads on St. Maarten and now the dump.

Minister of VROMI Christopher Emmanuel made clear that he will not react each time the dump is on fire, he said that the dump has outlived its lifespan and basically nothing more can be dumped on the dump. Emmanuel said that while he was being pressured to react, he did not but instead he was working on finding a solution for the dump fires.

Emmanuel said that his Ministry has repossessed government land that was being used up companies in the private sector in order to create space for dumping garbage, but this time around the dumping of garbage will be different because the garbage will be separated, and recycling bins will be placed all over the island. SMN News understands that the 10,000 square meters of land that government repossessed came from getting Windward Roads off government land while they were not paying to occupy the land on Pond Island and the car wreck location.

The Minister of VROMI further stated that government is investing Euros 230,000.00 in purchasing a machine with shifting blades to crush everything that is dumped on the dump. Emmanuel said right now there are about 20,000 pallets on the dump which are taking up space and that will be crushed, the same amount of tires is also on the dump that will be shredded The Minister said by the end of this year there will be no more dump fires as the solution they are working on is the practical, one being drilling pipes in the ground to release the methane gas. He said that government has to also terminate the agreement they had with another company (Synergy) which went bankrupt but in order for them to do that they had to pay off a huge debt the company has with a law firm to get the documents so that the contract with Synergy could be terminated. Emmanuel said the government cannot work haphazardly, but instead they have to do things correctly in order not to be confronted with legal problems.

Emmanuel said that the dump has been existing for years with fires almost every day and the Ministers that were in office before he did nothing to solve the problem. He made clear that he will not react to every photograph that is posted on Facebook or the media because the very next day there will be another fire, instead he is working on a long-term solution for the dump that has been on fire for years.

The Minister also indicated that there are people that are saying that they deliberately set those fires and his Ministry is currently investigating and if it turns out that the fires were set on purpose then a complaint will be filed with the law enforcement agencies.

Source: St. Martin News Network
Dump Fires have the attention of Council of Ministers — Government is working on solutions to stop the dump fires.