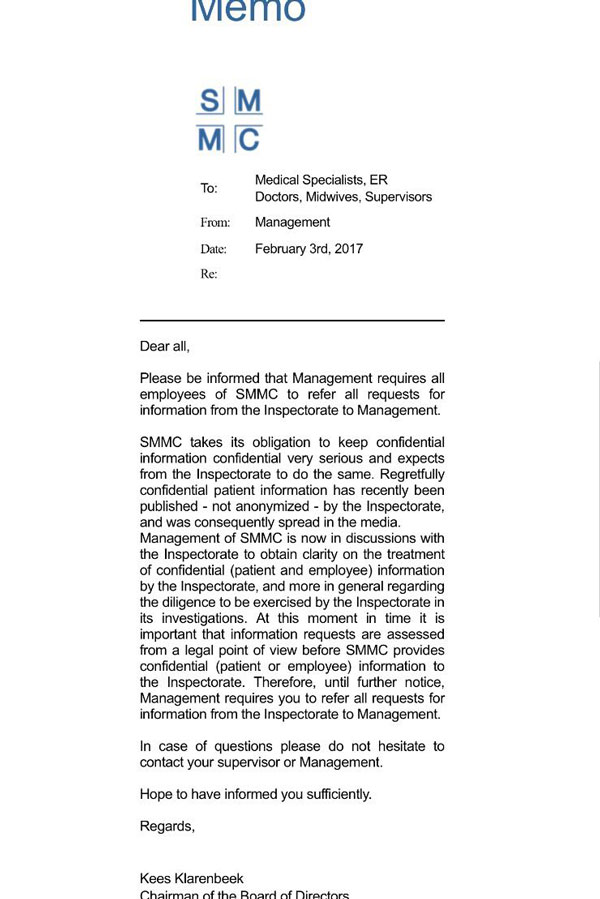 SMMC staff living and working in fear, Minister claims not to know about the gag-order.

PHILIPSBURG:— The St. Maarten Medical Center (SMMC) has issued a gag order to its staff on February 3rd instructing them that they are not to speak to the inspectors of the Inspectorate of IVSA. All questions from the Inspectorate regarding patients and employees must be sent to management for legal advice.
SMMC sent the gag order to all medical specialists, ER doctors, midwives and supervisors working at SMMC. According to the memo sent to the staff of SMMC it states that the Inspectorate released un-anonymized information to the media, while they take patient information confidentiality very serious. While the allegations in the gag order memo sent out by management of SMMC is based on blatant lies because the report SMMC is referring to is a report published by SMN News which was fully anonymized. SMMC has since taken the Inspectorate to court on this matter.
SMN News got hold of the memo earlier this week while on Wednesday SMN News reporter asked Minister of VSA Emil Lee if he was aware of the gag order he said he was not aware of such an order. Minister Lee even said that gag-order is against his principles when it comes to openness, transparency and good governance. Minister Lee further stated that the Inspectorate could walk in any time to conduct their investigations and ask questions to whomever he wants. Minster Lee maintained that the Inspectorate has that authority. However regarding the audit the Minister said that because IGZ will be involved in the audit they want to see the parameters that will be used, according to the Minister he feels that those discussions are healthy and it’s ongoing, but he could not say when those discussions would end and when the much-needed audit will take place.
Some weeks ago the Minister called for an independent audit which he announced on February 8th at the Council of Ministers press briefing. Minister Lee mentioned back then that the Inspectorate and SMMC have a strained relationship and as such he wanted an independent audit to see exactly where things are at SMMC. He said back then that the audit was going to be conducted by IVSA and IGZ. However, since then SMMC has put up a huge wall contesting the audit and wants to know the norms to be used in the audit. Ever since SMMC began protesting and dictating what and how they want the audit to be conducted. The Minister kept saying that SMMC wants to know parameters and norms that will be used. He also stated that the discussions are ongoing but so far SMMC is not complying or even agreeing to audit.
SMN News asked the Minister if he was aware of the working conditions at SMMC and if he knows what the staff of the medical institution have to endure. Minister Lee said he was not aware even though he promised to speak to the staff before. There are registered nurses that have been demoted to work as LPN while there are frustration and culture of fear among the staff at SMMC.
The nurses that were demoted or placed in a lower salary scale are nurses that have been working at SMMC for a number of years.
After announcing the audit and SMMC protested the Minister of Health Emil Lee chose to hire a consultant to conduct an audit at certain departments all of which will benefit SMMC. Asked about that audit and who is paying the consultant the Minister said that the Ministry will be paying for a ‘baseline’ study to improve the quality of care on St. Maarten. He further stated that this baseline study will help SMMC to put policies in place so that they can work towards JCI accreditation.
It should be noted that SMMC was audited in 2012 and to date, they have not complied with the recommendations made by the Inspectorate. One of those recommendations is that SMMC must report calamities most of which are not reported to the Inspectorate.
SMN News published quite a few articles where patients died or suffered serious complications after receiving treatment at SMMC, none of which were reported to the inspectorate. The Inspectorate learned of the cases after they were published on SMN News and then they investigated.
If the Minister of Health wants quality care and a new hospital on St. Maarten his priority has to be set on ensuring that SMMC complies with the laws that govern the country and not take side with SMMC because they are the ones that signed the agreement with SZV for the construction of a new hospital.

January 22, 2021
0
PHILIPSBURG:— Effective Friday, January 22, 2021, the House of Parliament will be closed until February 5, 2021, because of positive case of COVID-19. Efforts are being made for all Parliamentary meetings to be conducted via Zoom, and to be broadcasted...
Read more 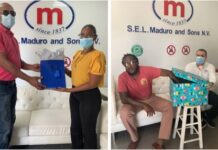 January 22, 2021
0
PHILIPSBURG:--- The St. Maarten Carnival Development Foundation (SCDF) has rolled out a safety and health plan for Carnival 2021 with the most COVID-19 preventative...
St. Martin News Network