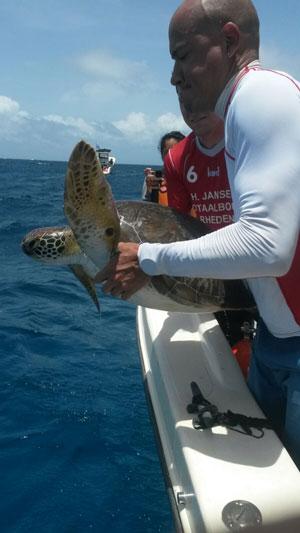 PHILIPSBURG:— The Advisory Committee of the Euan McFarlane Environmental Leadership Award of the Community Foundation of the Virgin Islands (Grantor) is pleased to announce the selection of Mr. Tadzio Bervoets in recognition of his important work as a dedicated and passionate Caribbean conservationist.

Recipients of the McFarlane Award are recognized to be persons who have applied themselves to the preservation of the natural or built environment on one or more of the small islands of the Caribbean and whose career or avocation demonstrates an appreciation of and support for the advancement of environmental stewardship and balanced development in the Caribbean. The Committee believes that presentation of the McFarlane Award to Mr. Bervoets (for the amount of $1,000) will boost conservation efforts in St. Maarten and promote recognition of the challenges faced by the region.

Mr. Bervoets was nominated by colleagues, who highlighted his policy and management skills and experience as demonstrated at local, national, and regional levels. Mr. Bervoets has both created and revitalized environmental institutions in St. Maarten, including the Ocean Care Foundation, the St. Maarten Nature Federation, the Reef Check Program in St. Maarten, and the Sea Scouts Program to teach local children about the marine environment. In addition, he helped to establish the territory’s first protected area, promoted enactment of species-specific legislation, successfully lobbied for the establishment of Mullet Pond as a Ramsar site of international importance, and serves as chair of the Dutch Caribbean Nature Alliance that supports conservation organizations in Bonaire, Aruba, Curacao, Saba, and St. Eustatius.

The Euan P. McFarlane Award was established in 1987 to provide recognition for persons demonstrating initiative, resourcefulness, and leadership in promoting conservation and enhancement of the environment in the insular Caribbean, with priority given to the smaller islands of the eastern Caribbean. Endowment funding for the award was provided by the late Laurance S. Rockefeller, and the program was initially administered by Island Resources Foundation from 1987-2014. The McFarlane Leadership Award is now managed by the Community Foundation of the Virgin Islands as a part of its program of support to youth, learning, family support and the environment.