~Will Sarah Wescot Williams sag her for not following thru on various recommendations?~

PHILIPSBURG:—The feelings about the passing of a motion of no confidence against Prime Minister Leona Romeo Marlin and Minister Stuart Johnson is a bittersweet one especially in particular against Romeo Marlin. The motion that was tabled by the Opposition MPs of Parliament is expected to hit a deadlock if the current coalition that is in limbo now that their party leader is in pretrial detention does not fall into place.
It is alleged that over the past months the Prime Minister has been very disrespectful towards her own Ministers and also towards senior Civil Servants who are fed up with her bullying attitude and disrespectful behavior.
It must be noted that Romeo Marlin has been very disrespectful towards her fellow colleagues in the Council of Minister in particular Minister of TEATT Stuart Johnson and Minister of VROMI Miklos Giterson. It is alleged that the Prime Minister has been calling Minister Stuart Johnson “a Flamingo” who has no clue of what he is doing and would rather see someone else fulfilling the post of Minister of TEATT rather than Stuart Johnson.
With regards to the Minister of VROMI, she is labeling him as a drunkard and a substance abuser who doesn’t show up to meetings. Sources say the Prime Minister is also constantly harassing him asking when he is going to repair the Government vehicle the MR-6 that was involved in a traffic accident in September 2018, that up until this week was parked up on the Government parking lot behind the Government building. Romeo Marlin allegedly went as far as labeling her fellow Ministers corrupt and has threatened she would report them to RST and TBO. What one would question why would Romeo Marlin label her colleague Ministers so negatively but now seeking their support if a motion is passed against her in calling for new elections.
Recommendations based on a recent Parliament meeting as requested by the Chairlady of Parliament Sarah Wescot-Williams to review the rules and guidelines of the World Bank went on deaf ears as Romeo Marlin allegedly said that Sarah Wescot Williams is not going to tell her how to run her show. It goes to show that Romeo Marlin is not willing to follow thru on the advice of her seasoned Coalition Members among others MP Sarah Wescot-Williams. Romeo Marlin allegedly has been giving Minister Wycliffe Smith a hard time in getting the Library up and running of which Minister Wycliffe Smith is planning to take this issue to another level as a coalition member besides being a member of the Council of Ministers.
Senior Civil servants are also in a silent uproar against the constant rude behavior of the Prime Minister who shows no respect to Civil Servant and continues to threaten them with warning and dismissal letters. It must also be noted that Romeo Marlin is centered around wrongdoings such as misleading the Governor with the Smith Orloff & Associates contract and the appointment of personnel for not following the correct procedures but yet she is quick to blame others.
The general sentiment of those persons who spoke to SMN News is that Romeo Marlin is sent home by Parliament she only has herself to blame as she has not been behaving in the manner that is expected of a Prime Minister but rather as a Leader of a bush organization who is not trustworthy and loves to blame others for her failures such as the World Bank projects that are on a standstill. The only World Bank Trust Fund project that is in execution is the Repairs of the Police Station.

All other projects such as Roof repairs, School Buildings, repairs of Hurricane Shelters are on hold due to the incompetence of the Prime Minister who refuse to follow thru on the advice of the Chairlady of Parliament Sarah Wescot-Williams to evaluate the World bank Trust fund rules and guidelines and adjust them accordingly in order to get things moving.
Another big failure of the Prime Minister is the current financial situation of the Princess Juliana International Airport and PSS workers who lost their jobs since Romeo Marlin took office.
Based on a Whatsapp message that circulated this past weekend it alleges that the Leader of the United Democrats Theodore Heyliger in his last remarks at Holland House in the presence of Minister Miklos Giterson and his public relation officer, prior to his detention on Tuesday morning, said that “Leona has to go and will be gone by Friday if all goes well. The text further states that Leona doesn’t answer his calls and she has been behaving very arrogant as if it’s the Dutch Government that had appointed her and she seemingly had prior knowledge that he would have been detained this week.”
One would wonder if the loyal UD Members of Parliament will follow thru on his intentions to send Romeo Marlin home.

January 19, 2022
0
PHILIPSBURG:--- The United People's Party is looking towards increased cooperation between the Legislative and Executive branches of the Government as key to implementing hard...

January 18, 2022
0
PHILIPSBURG:--- The House of Parliament will sit in a plenary public session on Wednesday January 19, 2022. The plenary public meeting is scheduled for 10.00 hrs in the General Assembly Chamber of the House at Wilhelminastraat #1 in Philipsburg....
Read more

January 18, 2022
0
PHILIPSBURG:--- The House of Parliament will sit in a plenary public session on Wednesday January 19, 2022. The plenary public meeting is scheduled for... 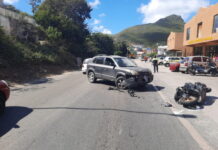 January 18, 2022
0
PHILIPSBURG:--- The police department received several calls around 12.30 pm on Tuesday afternoon for an accident on the Bush Road next to Miss Lally...

January 18, 2022
0
PHILIPSBURG:--- The police department received several calls around 12.30 pm on Tuesday afternoon for an accident on the Bush Road next to Miss Lally...

WYCFF Alzheimer’s Support Group meeting off to a great start. ...

USP: Ferrier is the kettle and pot having a conversation....

January 18, 2022
0
PHILIPSBURG:--- The United St. Maarten Party (USP) on Tuesday reacted to Michael Ferrier’s criticism of the party as “the proverbial kettle having a conversation...

WYCFF Alzheimer’s Support Group meeting off to a great start. ...

USP: Ferrier is the kettle and pot having a conversation....

Parliament to meet regarding examination credentials and admission Deputy Member of...

USP questions the security of the hospital contractual agreement signed...

Our Budget, Our reality. | SMN NEWS