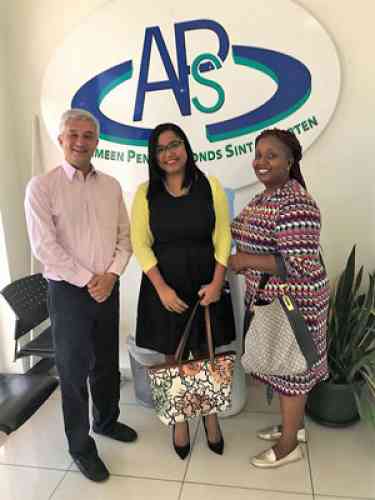 PHILIPSBURG:— Representatives of Algemeen Pensioenfonds Sint Maarten, APS, recently met with government formateur, MP Theodore Heyliger. During the discussions, held on Tuesday last, formateur Heyliger spoke of a number of local investments that play an important role in the socio-economic development of Sint Maarten. APS, as St. Maarten’s general pension fund administrator, is considered one such institution that also needed to be consulted in the process of formulating a governing program.
A variety of topics were discussed including ways the pension fund is already contributing to the country’s development as well as the positive spin-off effects on the local resulting from ongoing and future APS projects.
Heyliger and fellow parliament member Tamara Leonard spoke with members of the Board of APS, the Director and two managers of the fund. Also present was the Secretary of the Board.