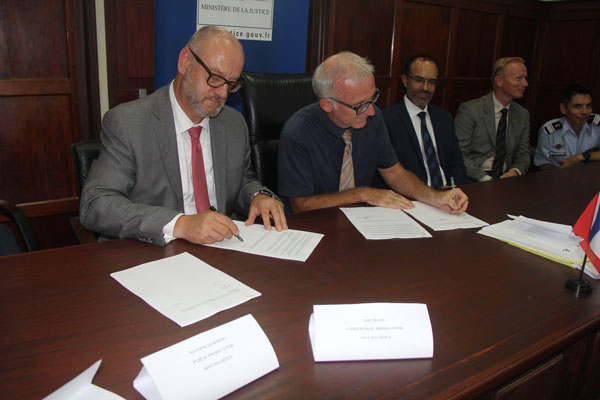 MARIGOT:— Law enforcement officers from the Dutch side of the island joined their colleagues at the Palais de Justice in Marigot to sign a historic Memorandum of Understanding (MOU) on Friday afternoon.
Representing the Dutch side were Solicitor General Jan Spaans, Chief Prosecutor Ton Maan, Prosecutor Nanouk Lemmers, Chief Commissioner of Police Carl John, Deputy Chief of Police Denise Jacobs, Chief Inspector and head of Support Division Benjamin Gout. Representatives from the French were Prosecutor Samuel Finiels, Vice Prosecutor Michael Ohayon, Commandant of the Gendarmerie Sebastien Manzoni, Captain Le Rasle chef de Antenne Octris.
The cooperation agreement is between the French and Dutch side and not a state agreement. According to Prosecutor General Samuel Finiels the agreement they signed on Friday will give the Police and Gendarmes the opportunity to work closer in solving crimes and mainly to ensure that criminals do not get away from the long arms of the law despite their nationality and place of habitation. The three main points agreed upon are Cross Border Pursuit, Cross Border Surveillance, and sharing of information.
Based on the agreement criminals that are held at the Pointe Blanche prison can now be tried in the French Court of Law if they are charged with any crimes committed on the French side, also inmates at the Pointe Blanche Prison can also be heard as witness by the French upon request and they do not have to go through the extradition process. An extradition request
Finiels said that the agreement stemmed from the Police Cooperation Agreement signed in 2015 signed by both sides of the island and that the French and Dutch have been working on he said that as Prosecutors they chose to put what they think would be best to curb crimes related to delinquency on paper and have the police work closer in order to solve crimes such as armed robberies, pursuing criminals that would commit crimes and then escape through the border now a thing of the past as the Police and Gendarmes can now chase criminals across the border, the only thing they have to do is to ensure both sides are properly informed when the pursuits are taking place. Law enforcement officers could also asked for a suspect police record which will be given to them as they share information.
Criminals that are in serving sentences on either side of the island also no longer have a free past. The minute they are up for release, both sides law enforcement officers will inform each other about the release of suspects and if they are wanted for any crime on either side then an extradition request will be filed for the suspect. As for the sharing of information on suspects that is now easier as both sides police could request information from each other to solve any type of crimes. Another big win with the agreement suspects that are convicted on either side of the island will no longer get a free pass because their conviction can now be added to their files when they appear in court which would then allow the judge to impose stiffer sentences. 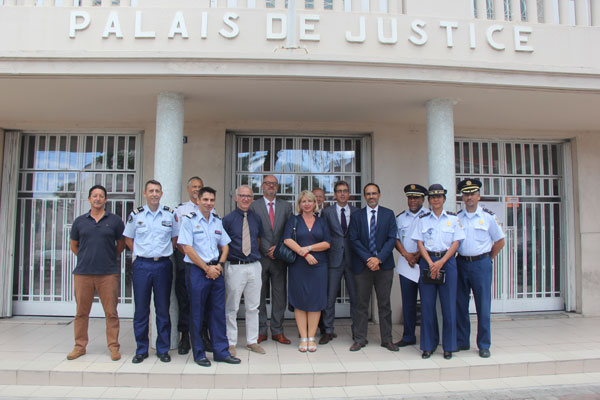 Finiels said that discussions started about a year ago while Prosecutor Nanouk Leemers said the discussions started since 2010 but this pass year they worked harder on the agreement, in order for police to better cooperate.
The signing was done by Chief Prosecutor Ton Maan on behalf of Country St. Maarten and Prosecutor General Samuel Finiels for the French side.
Chief Commissioner of Police Carl John said that these past years the two sides law enforcement have been working closely but with new agreement it will enhance the cooperation. John said the agreement will allow them to work smoother which yield better results. He said it’s years now they have a good working good on the operational level but the technical aspects was a setback.
Commandant of the Gendarmerie Sebastien Manzoni also expressed the same he said that the exchange of information will assist both sides of the island when it comes to solving crimes. He said another good part is that the two sides can now integrate to make controls and to ensure that suspects.

Click here to view photos of the MOU signing ceremony