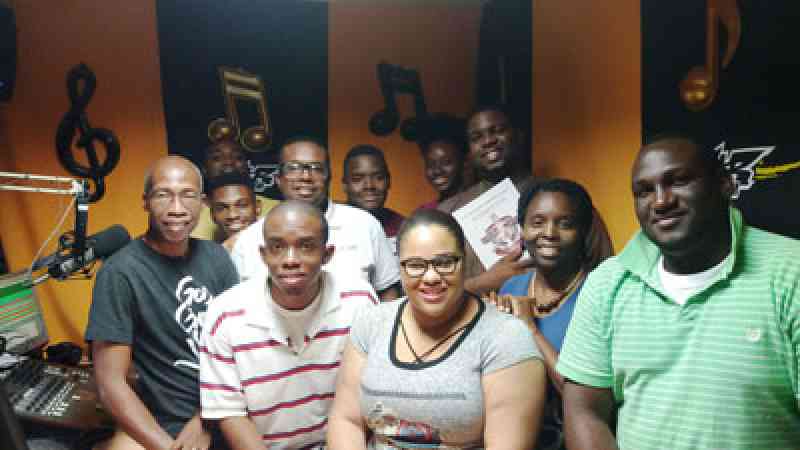 PHILIPSBURG:— Philipsburg, February 23, 2018: Fresh, one of the longest-running youth radio programs on St. Martin, hosted by Y2X, the youth wing of Victorious Living Foundation, hosts its final interview in its election series this Saturday from 6 p.m. via its new home, Tunescarib.com. For 14 years, scores of youth have hosted Fresh on 92.5FM which was first Radio Maranatha and then transferred a few years later to Youth Radio (YR). The first president of Y2X, Andre Huie who now owns www.voiceofthecaribbeanradio.net and recent Ph.D. graduate Dr. Rolinda Carter were among the first youth hosts of Fresh with the Y2X Crew.
Saturday, February 17th was the last airing of Fresh on YR 92.5FM based on a management decision. Consequently, through the kind gesture of owner, Dennis Van Putten, the Y2X Crew will premiere its first TV/radio broadcast with the #1 candidates of both the National Alliance and the St. Maarten Christian Party, Ms. Silveria Jacobs and Mr. Wycliffe Smith respectively on http://www.tunescarib.com/.
19-year-old Erwin Romney who celebrates one year with the Y2X Crew on March 18, stated:
“I am a high school graduate, an artist, radio talk-show-host, Sergeant of the 1st St. Maarten Boys’ Brigade, an inspirational speaker, a fun sharer, a leader and most importantly, I am a learner. Before I joined the Y2X radio talk show, FRESH, I was a very close-minded person and had no faith in myself. I’d be walking around with a nice big fake smile in public. One evening at the Boys’ Brigade meeting, a man named SXM Barack Obama… just kidding, his name is Roy Cotton Jr., a motivational speaker towards the youth, spoke to us; and in that short time, I chose to step out of my comfort zone and for once, I became more open towards my team. I went further than my comfort and asked to be on Fresh.
“On the day of the radio podcast, I thought I was going to be a guest but instead, I was a co-host. It was a rough start considering it was my first time. As the show progressed, I felt the flow of the show and stuck with it. It was supposed to be a one-time thing but it turned out to be a hobby and something I really want to do. I did a solo show, met great people from St. Maarten/St. Martin and overseas; bonded with the team, improved me and each other, learn together, and enjoy myself with the company of good people.
“These are the lessons that I have learned being with FRESH: 1.Beautiful things happen when you step from behind your comfort zone and fear. 2. You become stronger when you open yourself to your team. 3. Be honest with yourself and don’t be afraid of being yourself. 4. Surround yourself with positive vibes and people who will accept you for who you are and just as crazy as you. 5. Every person you meet will teach you something whether they intend to or not. 6. Never stop learning about yourself and this crazy world. 7. The mind is the greatest weapon the human has and there is no limit to imagination and intelligence.”
18-year-old Fabienne Janvier who has been with the Y2X Crew for only three weeks stated:
“The third interview in Fresh’s political series was conducted by the Y2X crew on Saturday 17, February 2018. As is customary at Fresh, all parties were invited to share the main reasons why our listeners should vote for them. The #2 candidates of three parties Mr. Duncan Van Heyningen of the PPA, Mr. Christopher Emmanuel of the NA and Mr. Peter Gittens of SMCP, consented to join the election series. Unfortunately, only Mr. Gittens and Mr. Emmanuel made an appearance.
“They were given a maximum of 1.5 minutes to respond to the questions and also given an extra minute for rebuttal. Both candidates had to answer tough questions fashioned by the Y2X crew. The interview was terrific; there were no harsh arguments and no constant back and forth disagreements between them. They made a concerted effort to get their points across.”
Join the Y2X Crew this Saturday at 6 p.m. for the final interview before elections with the #1 candidates of NA and SMCP at http://www.tunescarib.com/. To partner with Y2X or Victorious Living call 1-721-524-8731; visit www.victoriouslivingsxm.org or send them an e-mail at This email address is being protected from spambots. You need JavaScript enabled to view it.
document.getElementById(‘cloak229bb6f73171ad9adaf995f71a4a1bb1’).innerHTML = ”;
var prefix = ‘ma’ + ‘il’ + ‘to’;
var path = ‘hr’ + ‘ef’ + ‘=’;
var addy229bb6f73171ad9adaf995f71a4a1bb1 = ‘y2xcrew2victory’ + ‘@’;
addy229bb6f73171ad9adaf995f71a4a1bb1 = addy229bb6f73171ad9adaf995f71a4a1bb1 + ‘gmail’ + ‘.’ + ‘com’;
var addy_text229bb6f73171ad9adaf995f71a4a1bb1 = ‘y2xcrew2victory’ + ‘@’ + ‘gmail’ + ‘.’ + ‘com’;document.getElementById(‘cloak229bb6f73171ad9adaf995f71a4a1bb1’).innerHTML += ‘‘+addy_text229bb6f73171ad9adaf995f71a4a1bb1+”;
.