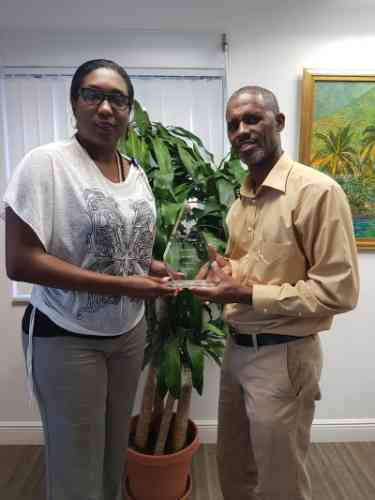 PHILIPSBURG:— NV GEBE is proud to have been named “Best Sponsor of the Year 2018” at the Brown Pelican Award held on Sunday, November 18, 2018. NV GEBE who was one of the top three nominees along with CC1 and Domino’s Pizza walked away with the award. “It’s a great honor to be recognized as sponsor of the year, this win reflects on the commitment in which NV GEBE has towards the community of St. Maarten. This is also an acknowledgment of the commitment and dedication that NV GEBE has towards the development of sports on the island,” said CEO Kenrick Chittick, who was part of the team to receive the award at the ceremony.

June 17, 2021
0
The Royal Netherlands Navy vessel HNLMS Holland had two major drug interceptions in the night of June 10th. On the Caribbean Sea, the navy...

June 17, 2021
0
PHILIPSBURG:— As of June 16th, there were eleven (11) persons who tested positive for COVID-19; however four (4) persons have recovered; bringing the total active cases to seventy-six (76). The total number of confirmed cases is now two thousand...
Read more