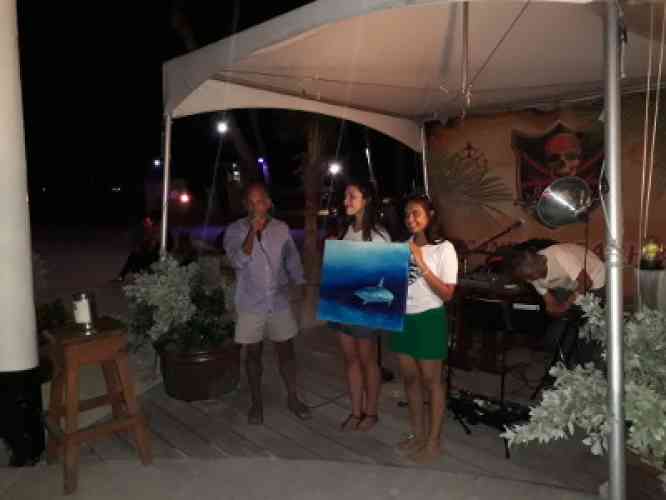 “It is time we change our image about sharks, they are not out there to attack and scare people; sharks are swimming in our oceans for more than 400 million years. Healthy oceans need sharks, we depend on our oceans therefore we need our sharks. On average less than ten people die due to a shark bite per year in the entire world, sharks are not a threat to humans, we are a threat to them as we kill 100 million a year” commented Nature Foundation’s Project Of-ficer Melanie Meijer zu Schlochtern.

The Rum Tasting was a great success, with over eighty people tasting the differ-ent Bacardi Rums and Cocktails poured by the excellent bar tenders. During the event, a beautiful shark painting has been auctioned by Soc from Island 92; the anonymous buyer will receive eternal fame for its support to the Nature Founda-tion. Several donations also came in through the possibility to adopt your own shark or to purchase 4Ocean bracelets, t-shirts, hats and reusable shopping bags. A total amount of $1,800 was collected during the event in support of the Nature Foundation St. Maarten and will be used to continue their shark research and tagging activities. St Maarten Shark Week is part of the Dutch Caribbean Nature Alliance ‘Save our Sharks’ project funded by the Dutch National Postcode Lottery.