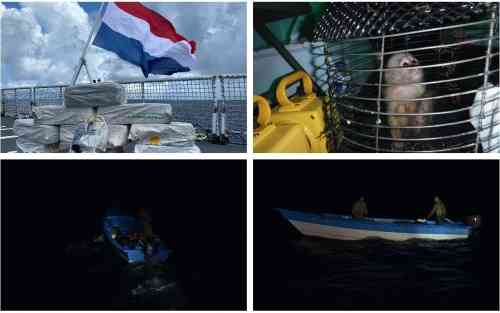 WILLEMSTAD:— The speedboat was spotted by a Dash-8, the Caribbean coastguard’s maritime patrol aircraft. The go-fast was seen on a known smuggling route, and the Groningen was then mobilized. By launching her two fast boats, known as FRISCs, the Dutch naval ship was able to stop the drugs boat. Besides three persons, the drugs and two firearms, a small monkey was also found on board.
Because the go-fast started to take on water, the suspects were taken on board for safety reasons. The suspects and the illicit goods were then transferred to the US coastguard vessel Isaac Mayo. In