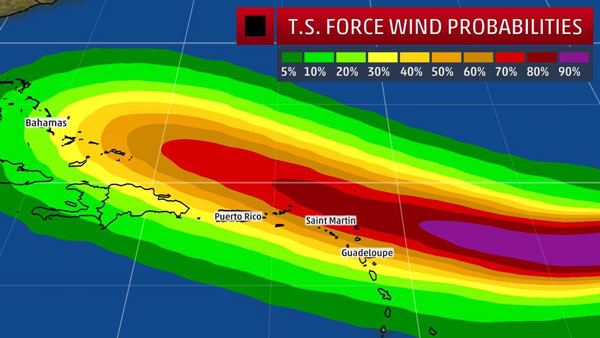 Additional strengthening is expected as Irma moves westward in the week ahead.

PHILIPSBURG:— Hurricane Irma will move close to the Leeward Islands and Puerto Rico by the middle of this week, and then near or north of Hispaniola, the Turks and Caicos and Bahamas late week into next weekend.
Hurricane Irma has strengthened as it churns westward through the central Atlantic Ocean and could threaten several land areas over the next week, including the Leeward Islands, the Bahamas and potentially the U.S. East Coast.
The center of Irma is located 885 miles east of the Leeward Islands and is moving just south of due west at about 15 mph.
For the next five days, Irma will move west-southwestward, then west-northwest again on the south side of a ridge of high pressure called the Bermuda high, centered in the central Atlantic.
Some intensity fluctuations are likely, but overall Irma is expected to gain strength and it could become a Category 4 hurricane in the days ahead.
Uncertainty remains surrounding where Irma will track beyond five days due to the complex interaction of Irma with the upper-level weather pattern expected late this week in the western Atlantic and the eastern United States. That weather pattern evolution is important for determining where Irma will track in relation to the U.S. East Coast either next weekend or early in the second week of September.
No matter what the future holds for Irma’s path and intensity, the National Hurricane Center advises, “everyone in hurricane-prone areas should ensure that they have their hurricane plan in place, as we are now near the peak of the season.”
The NOAA Hurricane Hunters will begin flying reconnaissance flights in Irma beginning on Sunday to gain more information on the hurricane’s latest intensity and size. In addition, NOAA aircraft will fly high altitude missions starting Monday to gather more data on the atmospheric environment around Irma which could help improve forecast guidance on the storm.
Below is everything we know about Irma right now.