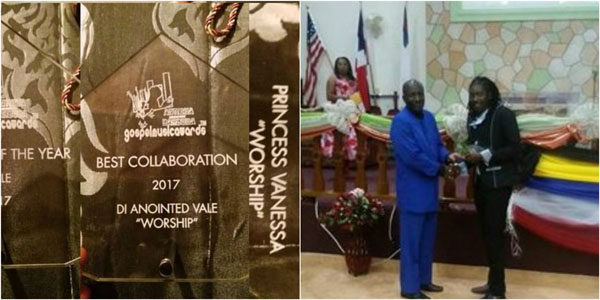 The So Arise, 2017 Antigua and Barbuda Gospel Music Award winners have been named. Walking away the winner of three out of his six nominated awards, at the March 25th ceremony, is Jamaica’s own, Di Anointed Vale, who is an International Gospel Reggae Recording Artiste, on the St. Kitts-based, JIFE Music Record Label. Vale’s debut Album “Blood A Jesus”, is the label’s first completed project. JIFE Music Record’s President Nyquan Nisbett, who is also one of the main producers at the label, was also nominated for “Producer of the Year”, which was the only category, decided by judges and not open for public voting.
Di Anointed Vale walked away as the reigning, “International Psalmist of the Year (Male)”, and “Vocalist of the Year (Male)”. His song “Worship” won “Best Collaboration” featuring Princess Vanessa, a native of Guyana.
“It’s a real great feeling to know that all the hard work and the sleepless nights in the studio, mixing the songs, building the rhythms and all of that stuff paid off. To see that someone recognizes your work, it feels real good to know that there are people who would recognize what you have contributed,” was Vale’s response to the overwhelming recognition, he has received for his debut album that was recently released, in St. Kitts in December 2016. He produced every track and sung some of the background vocals and it’s become an overnight success.
Vale was also nominated for “Songwriter of the Year (Male)”, “I’m Available” featuring Guyana’s Eddie Neblett, picked up two nominations, one for “Best Collaboration” and the prestigious, “Song of the Year” nomination.
“Jesus is For Everyone” is the Record Label’s Mission Statement, which is also how they came up with JIFE as their acronym. JIFE Record Label is a subsidiary of Palm Branch Media, which is a media production company in St. Kitts. JIFE was formed for the purpose of exploiting some of the best like Vale, in Caribbean Gospel Music. JIFE was founded by four St. Kitts & Nevis entrepreneurs; Andre Huie, Roy Nisbett, Lester Henry and Jermaine Willock, which are experienced in performing, producing and promoting music.
By the Grace of God, Di Anointed Vale has obtained great success, he plans to continue on his anointed mission, to accomplish his God-given purpose. With JIFE Music on his side, fulfilling what they conceived, out of their passion and zeal, to proclaim the Glory of Jesus Christ, catering to the lovers of Urban and Caribbean Contemporary Music. Their future endeavors together, promise to carry the same anointing to the Glory of God for the restoration of His Kingdom.