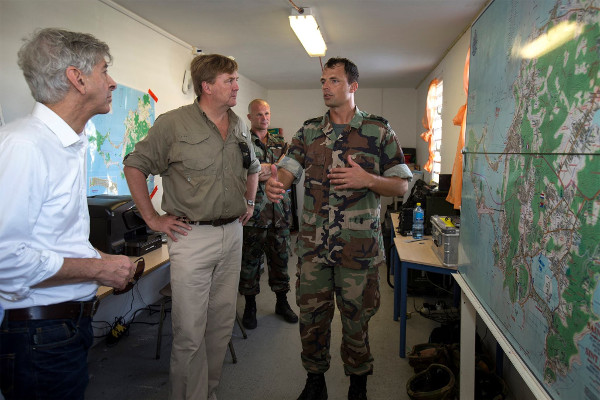 PHILIPSBURG:— King Willem-Alexander is shocked by the damage to St. Maarten. “This goes beyond all imagination,” he spoke at his visit to the island. The other two Upper Winds, Saba and Saint Eustatius have suffered less. The King and Minister Plasterk are going to look there today.
The security situation on Sint Maarten is improving visibly and by introducing additional units it is possible to be present on large parts of the island.
The flow of information between the Dutch and the French side of the island improves and this will help to coordinate the provision of aid. The distribution of food and water continues in a controlled manner and will continue in the coming days.
The local government has increasingly gained focus on the safety of the key infrastructure (airport, port, fuel stock, water plant, etc.). The contribution of defense capabilities supports the government in the recovery. Local authorities are beginning to get hold of the situation and look forward slowly. This speeds up the stabilization of the situation.
So far, all evacuations have been completed without problems, ordered and registered. A total of 531 evacuees were flown out of the Netherlands (with air force and coast guard aircraft). The airport is secured by military forces of the Compagnie In West (CIDW) and the airport launch is beginning to show progress.
The 32nd Raiding Squadron of the Marines Corps carries out patrols, provides reception and logistical handling of aircraft and supports local authorities. In the next 24 hours, she will continue to perform these tasks in combination with the distribution of water and food.
The crew of Zr.Ms. In particular, Zeeland is engaged in supporting the port master in operations to make the seaport operational.
Zr.Ms. Pelican was moored yesterday and goods and means of transport have been discharged. In addition, the strategic shipping vessel distributes water to Saba and serves as a Forward Operating Base and Command and Control Center.