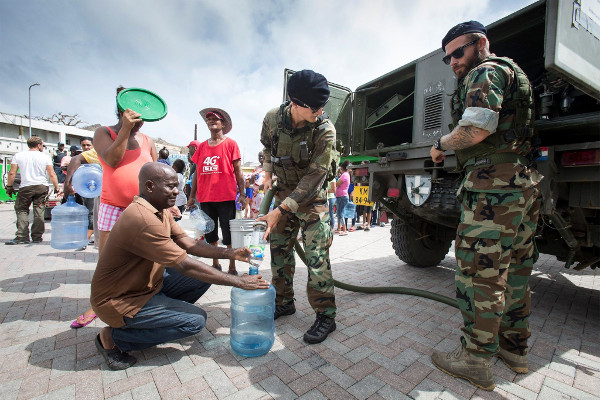 His Majesty King Willem-Alexander visited Saba and Saint Eustatius yesterday to put the people under the belt. At Saint Eustatius, the local authorities are fully reorganizing the restoration of the island. The captain thanked the military for their efforts and assistance in restoring the infrastructure. The soldiers who had been deployed on Saint Eustatius joined the unity in Saint Maarten. This brings the total number of soldiers to 569 people. That is exclusive of the 111 keepers of Zr.Ms. Pelican and Zr.Ms. Zealand.
At Sint Maarten, the maintenance of public order and security remains a high priority. However, more and more emphasis is being placed on providing a good logistics chain, so that aid can reach the island and distribute it to the population. This requires the repair of the air and sea ports as well as the utilities. Due to the supply of additional military personnel and additional means of connection, the airport is militarily operational but still open for civilian use. As a result, 1,400 people were evacuated over the past few days, including 531 Dutchmen with the Air Force C130 and the Coast Guard Dash-8. The Minister of Tourism of Saint Maarten assists with the evacuation of tourists and people from other nationalities who want to leave the island. Air Force soldiers ensure the security of the airport.
The harbor master gets an eye on incoming ships and sets up a so-called Daily Vessel Movement schedule. Zr.Ms. Zeeland and Zr.Ms Pelican coordinate efforts to make quays useful and in close contact with the harbor master. Furthermore, the Pelican acts as a Forward Operating Base and Command & Control Center.
Marines of the 32nd raid quadrant still carry out patrols to monitor public order and safety, take care of reception and logistical handling of aircraft and support local authorities. In the next 24 hours, they will carry out these tasks, in combination with the distribution of water and food. Global water distribution points have been announced via the radio: Point Blanche, Sucker Garden and Cole Bay. The advice to residents is to listen to the radio station Laser (101.1FM). Exact distribution sites of water and food are disclosed here.