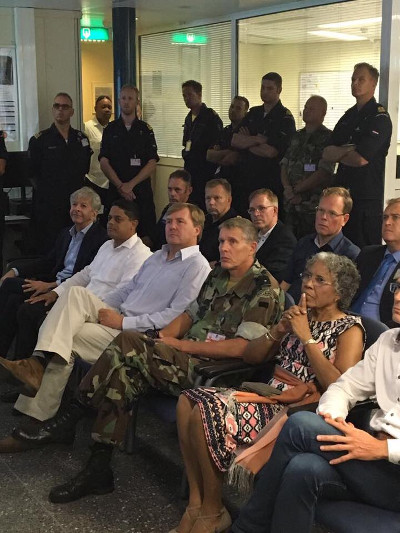 PHILIPSBURG:— On September 11, 2017, His Majesty King Willem-Alexander visited St. Maarten to personally place the population under the belt and assess the situation on the spot. On September 10, 2017, he joined Curaçao and immediately visited the Marin Base Parera from which the emergency relief operation is being directed. The king expressed his appreciation for the executive defense staff.
The security situation on Sint Maarten is improving visibly but incidental robberies have not yet been stopped. The advent of additional units makes it possible to realize a more extensive patrol scheme and to be more dispersed. Managing the security situation, getting key infrastructures, such as the airport, port, fuel supplies and drinking water facilities, will be prioritized. At the same time, the provision of water, food and other food and the organization of evacuations are given a lot of attention.
Evacuations take place through military aircraft, most flights to Curaçao. Yesterday at 23:00 local time, a KDC-10 left aboard the first 100 evacuees from Curaçao to the Netherlands.
Zr.Ms. Zeeland conducted a harbor survey yesterday, checking the possibilities for mooring larger passenger and cargo ships. As a result, the first cruise ship yesterday ended, allowing the first evacuees to leave the island for water.
Zr.Ms. Pelican is on its way to Saint Maarten with additional personnel, equipment, and emergency services. In addition, it will function as a command post and forward operating base after arrival. The strategic shipping ship is expected at noon around St. Maarten.
The 32nd Raiding Squadron of the Corps Mariniers, in addition to patrols, deals with shelter management, receiving aircraft and distributing water and food. Today a very large freight feed and water is introduced to the affected area. Soldiers will support local authorities in the distribution.
There are still problems with the communication opportunities on the island. This complicates the logistical flow of goods and the coordination of operations. 20 marines from the 2nd Navy Combat Group (2MCG) staff are included in the on-site staff to efficiently drive the larger group of soldiers and provide the assistance they need most.
The situation on St. Eustatius and Saba improves. In recent days, Mariners helped the population to clean up debris in the streets and have made schools and a hospital safe for use with local fire brigades. The marines will be deployed to Sint Maarten from tomorrow, where their assistance is most urgent. However, some military personnel remains in contact with the outside world, as communication on the islands is not yet stable.