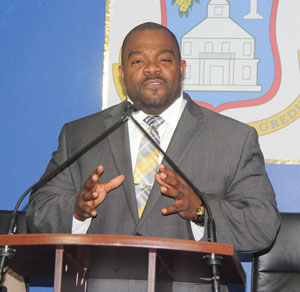 ~ Members of Parliament should begin telling the truth ~

PHILIPSBURG:— Minister of VROMI Christopher Emmanuel lashed back at Member of Parliament Sarah Wescot Williams on Wednesday during the weekly Council of Ministers press briefing. Emmanuel said that he asked a general question in a WhatsApp chat where he asked everyone in the group to say exactly whether or not they are in agreement with the Dutch and their conditions for aid. He said at no time did he direct his question to any specific person in the chat neither did he say members of the coalition should not have their own opinion. Emmanuel said he posed his question on October 13th. Emmanuel called on the MP (coalition partner) to begin telling the people of St. Maarten the truth because right now only lies are being told. Emmanuel also called on members of the media to begin writing exactly what he said and prior to publishing statements from other MPs they should contact him to clarify whether or not what they were told are the truth. Emmanuel said that he is being accused of spending Naf. 150,000.00 for a project. He said the leader of the UP party knows that a Minister cannot sign off on anything that costs more than Naf. 50,000.00 and he (Emmanuel) certainly cannot go the Minister of Finance to write him a check for Naf.150,000.00.