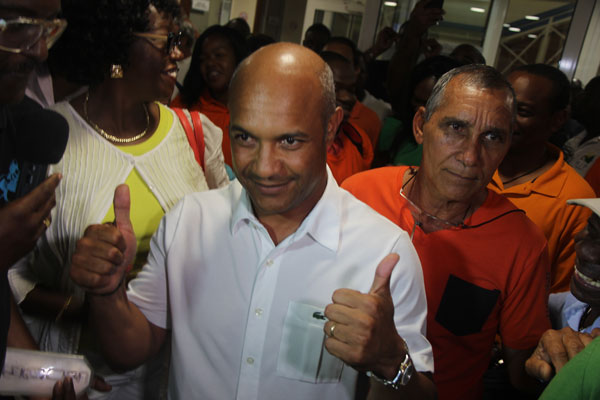 MARIGOT:— A very low voter’s turnout on Sunday for the first round of the Territorial Election has left three of the eight political parties that contested the election to battle next Sunday in the second round.58.6 % of the voters did not vote on Sunday, leaving only 42.4 % of the voters to determine who will govern the French side for the next five years. Of the 20275 registered voters, only 8642 voters cast their votes for the eight political parties that contested the election.
Despite the low voter’s turnout Team Gibbs 2017, headed by Daniel Gibbs scored 4096 of the votes, while the MJP headed by Louie Mussington came in second with 1,152 votes and MVP headed by Alain Richardson, third with 990 votes. Team Gibbs 2017 won in all 19 of the polling stations.
The other five political parties that contested the election in the first round have been eliminated from the second round.
Daniel Gibbs from had said during the campaign that he would have taken the election with one shot but the low voter’s turnout stopped him. For Team Daniel Gibbs to win outright in the first round on Sunday he would have had to secure 50 %t plus one percent of the votes cast on Sunday, as well as 25% of the total registered voters, which means Gibbs would have had to secure just over 5000 votes in this first round, clearly he was lacking just over 200 votes to make history on St. Martin.
At the end of the election, Sunday night Team Gibbs and his entire party rushed to the Collectivity in a parade honking horns and waving their party flags celebrating their victory in the first round. However, the leader of Team Gibbs made clear during his remarks that the work is far from being finished since his team has to do what it takes to bring out those voters that did not vote in the first round. Gibbs said that he is grateful and full of emotions with the results but made clear that the people have sent a strong signal to the politicians and they already expressed whom they wanted to govern for the next five years.
Gibbs also commended the President of the COM Aline Hanson for her bravery, even though ill she still defended her mandate. He said the past five years was not at all easy for the President but she did not give up, instead, she persevered to the very end and even formed a list to contest this election.
Team Gibbs won the battle but not the war — MJP

Leader of MJP Louie Mussington in his remarks said that the work for his party has now begun because while Team Gibbs won the battle during the first round he is yet to win the war next Sunday. Mussington said that his party is willing and open to negotiate with their opponent but they will lead the fight since the people have spoken. The MJP leader and his team plan to do whatever it takes to win next Sunday. He credited President Aline Hanson whom he said is ill but still did what she needed to do during the past five years, and was even present Sunday night to deliver the preliminary results. Mussington said that he will begin negotiations as early as Monday morning and on Monday he will be making a statement on their way forward. On more than one occasion Mussington said that his party is willing to negotiate and form an alliance to win the election next Sunday, however, he maintained that he will be leading. Asked by SMN News if he was ready and willing to work with Alain Richardson, his first cousin with whom he started his political career, Mussington said that he is ready to negotiate with everyone. While delivering his speech at the Collectivity, he said that its time the people of St. Martin realize that there must be a set of people that are ready and willing to change the course and work in the interest of the younger generation.
The Absentees won this election — MVP
Leader of the MVP Alain Richardson in his remarks Sunday night said no one won the election on Sunday night, those that won the election are those that did not vote. He said that almost 60% of the voters did not leave their homes to cast their votes and as such, they won. Richardson also said that he was the last to form a list and to contest this year’s election and during a very short time he managed to mobilize almost 1000 voters to put their confidence in him and his team.
Richardson also thanked the President of the COM Aline Hanson who braved her illness and fulfills her mandate and even defended it on Sunday.
With the eight political parties that contested Sunday’s election confused the voters as it is clear that the politicians are divided and are not able to work together in the interest of the people. Even though the eight political parties that contested the election on Sunday changed their party’s name and logos that did not do the trick as the same faces were heading the lists. The voters seemed disgusted and even betrayed by those they elected in past.
In 2012 the RRR headed by Alain Richardson won the election, Richardson sat for one year as president but was condemned by the Council of State for violating the election rules. Even though the current government is the RRR government, all those that was elected on the RRR slate abandoned the leader and party and formed their own to contest the 2017 elections.
If Mussington and Richardson do not find common ground by next Sunday then there will be three political parties contesting the second round.

Click here to view 2017 Territorial Council Round One Election Turn Out Statistics.