PHILIPSBURG:— The Judge on instruction on Friday, March 3, 2017, in connection with the MARS Investigation into the disappearance of the two men S.L. Sarante-Diaz and E. Rosario. ordered the custody of suspect K.K.K.S. for eight (8) days she was arrested and detained on February 21. The suspect is still in restrictive custody. The investigation is in full swing.

The Judge of Instruction on Friday, March 3, 2017ordered the custody of the suspects H.H.M. and H.F.M. for eight (8) days. The two men are suspects in the ongoing investigation into the fatal shooting at Hope-estate code-named Broccoli. The investigation is in full swing. Witnesses who may have additional information about the incident are requested to call 54-22222 ext. 213-214, the anonymous tip line #9300 or 911.

January 26, 2021
0
PHILIPSBURG:— The St. Maarten/St. Martin Christian Council takes note, much to its dismay, of the recent decision by Government and the SCDF to host carnival 2021. While this annual cultural event has much-needed revenue capacity and can be a...
Read more 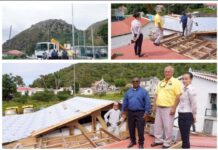