Home St. Martin News Network Minister of Health working with LCF to see if they can combine... 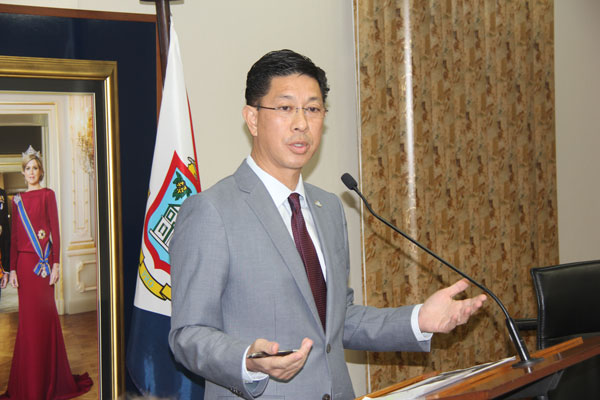 PHILIPSBURG:—Minister of Health and Labor Emil Lee announced at the Council of Ministers on Wednesday that he is busy negotiating with agents of the Louis Constant Fleming Hospital to see if they could work out a working agreement as he is busy putting together a plan for the construction of a new hospital on the Dutch side of the island.
Minister Lee said it would not be sensible for both sides of the island to offer the exact same services and to bring in the same specialists, therefore he believes that if the two hospital could come together and have an agreement in place then it would give the Dutch side a better idea on what type of hospital they need to construct on the Dutch side and the types of services that has to be provided.
Asked by SMN News if the persons he discussed with at the Louis Constant Fleming Hospital are competent enough to take decisions for LCF especially since hospitals on the French side falls under the state.
Also SMN News asked the Minister if he managed to discuss the payments for example if the two hospitals would begin to accept the social insurance from both sides of the island, for example LCF accepting the social insurance card from SZV and SMMC from the French Social Security. Minister Lee admitted that the discussions have to go further, one be held in Martinique since the hospitals do fall under state. He said the discussions right now is to decide if they need to go further to get the relevant authorities to continue the discussions and come to an agreement. Minister Lee said that there is a willingness from both sides of the islands and already there is some kind of cooperation in place that he believes have to be structured properly.
He also admitted that costs and payments were discussed one being the acceptance of the social security cards.
Another issue regarding health care is the services that are provided at SZV and how patients are treated. Several patients, some unable to walk are being sent back to work even though their house doctors placed them on sick leave. The patients who went to SZV to have their cards signed told SMN News that the doctor at SZV do not see them or examine their medical condition but instead they are given a number and told to wait while an employee will take their cards to the doctor who would immediately cut short their sick leave despite their medical conditions and order them to return to work.

SMN News contacted Minister Lee on this and asked that he check to see exactly what is taking place at SZV and if there are doctors at the health insurance company that are competent to over-ride the decisions of the house doctors or if the doctors at SZV are purely administrative.
Minister Lee said that while he was contacted by SMN News on the matter he did not get the opportunity to look into the matter as yet but promised to do so shortly.
However, SMN News learnt that SZV is busy restructuring the organization, one being able to hire doctors who would examine patients and decide whether or not the decisions taken by the house doctors are accurate.

Source: St. Martin News Network Minister of Health working with LCF to see if they can combine efforts in providing joint health care.