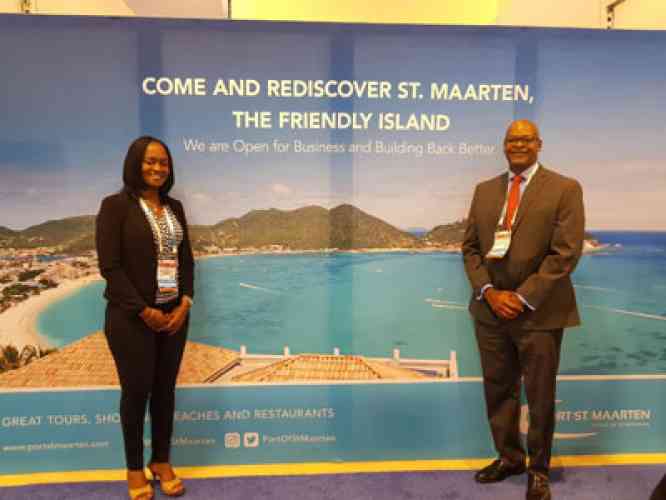 POND ISLAND:— Acting Minister of Tourism, Economic Affairs, Transportation and Telecommunications (Ministry TEATT) Cornelius de Weever, who just recently returned after leading a delegation to Seatrade Cruise Global, said there is still a great demand for the destination, and concluded that representing the country at the leading annual global business-to-business event for the cruise industry was a success.
Seatrade Cruise Global was held at the Broward County Convention Center from March 5-8, and the minister lead a delegation that included Port St. Maarten, the St. Maarten Chamber of Commerce & Industry, SXM Airport, and the St. Maarten Tourist Bureau.
Seatrade Cruise Global is being held in partnership with Cruise Lines International Association (CLIA) and the Florida Caribbean Cruise Association (FCCA).
“I would like to firstly congratulate Port St. Maarten Management and Staff with respect to the booth that they had set up for the conference. A job is well done as it encapsulated what the destination has to offer cruise visitors in connection with our recurring theme of ‘re-discovering’ the island in a post-Irma era.
“The destination has the opportunity to develop best practices from lessons learned with the passing of Irma. As we re-invent ourselves for others to re-discover, there is great demand for the destination as pointed out at the conference.
“We learned from the cruise lines that six-months after the storms, passenger satisfaction ratings are soaring, and destination St. Maarten was among destinations singled out where guest ratings are higher than they were prior to the storms.
“I would also like to thank Port St. Maarten Management and Staff for their post-storm destination marketing that has led to the successful return of our cruise partners,” Acting Minister of TEATT Cornelius de Weever said on Sunday.
St. Martin’s Vice President Valerie Damaseau was also present at Seatrade Cruise Global as part of the ‘one-island destination’ promotion that was signed off in a cooperation Memorandum of Understanding to promote the island back in February.
Cruise industry executive, experts, and thought-makers from the world’s largest cruise companies were the highlight of the conference as they gave insight into the latest cruise trends and developments.
Seatrade Cruise Global brought together buyers and suppliers for the four-day conference and three-day exhibition. The conference in 2017 saw more than 11,000 registered attendees, over 700 exhibiting companies from 113 countries and some 300 international journalists.