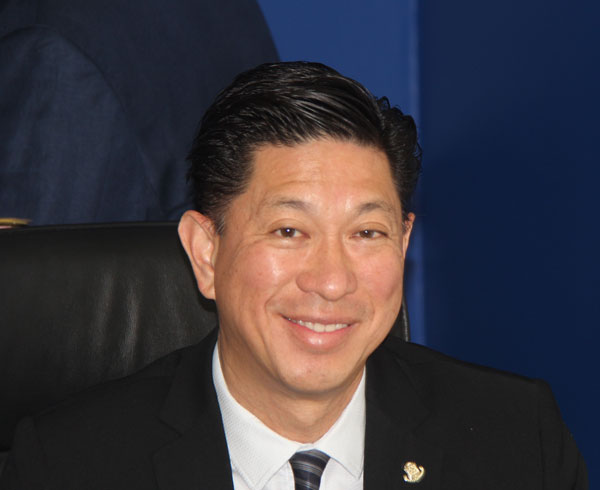 PHILIPSBURG:— Minister of VSA Emil Lee confirmed on Wednesday that a baby was born on St. Maarten with symptoms related to microcephaly. The Minister is not too happy with the media reports on the first ever suspected microcephaly case on St. Maarten because he believes it regards the privacy of the family that has found themselves in a bad situation.

Minister Lee said the mother that gave birth to the child is not a resident of St. Maarten and thus felt that St. Maarten barely missed the bullet. Minister Lee also said that he is yet to receive an official report on the case regarding the birth of the infant that was born with what is suspected to be microcephaly.

The Minister at the weekly press briefings showed photographs he took of garbage that was disposed alongside the roads where he lives all of which he said are breeding sites for mosquito. The Minister of Health said he raised his concerns with the Minister of VROMI especially seeing that someone disposed of a toilet they removed from their home alongside the road. He said these are real breeding sites for mosquito and even felt that the Ministry has lost the war against mosquitoes. The Minister urged residents of St. Maarten to properly dispose of their waste and to also ensure they do not have containers that can collect rain water thus creating mosquito breeding sites.

Afoo Group submitted a request to dismiss staff.
Minister Lee also announced that the owners of Fresh Market and Afoo Supermarket have submitted a request to dismiss their staff since they intend to close their doors by August 31st. Minister Lee the Department of Labor has been providing the necessary assistance while they also informed the owner of the two supermarkets of their legal and moral obligations towards their staff. He said one of the things the department pointed out to the employer is that the workers must remain on their payroll until a decision is rendered on the dismissal request. Lee said the only way staff members could be taken off the payroll is if the employee and the employer arrived at an agreement.