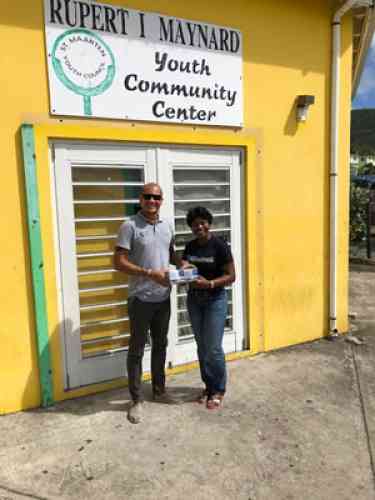 PHILIPSBURG:— St. Maarten Nature Foundation, through the generous support of private individuals and the business community, have distributed close to 500 facemasks to the population on Thursday, including to the shelter residents evacuated due to the fires at the landfill. Some 50 masks were handed out at the Rupert I. Maynard Community Center in St. Peters to evacuees. The facemasks were distributed free of charge in order to protect the community from the toxic fumes caused by the burning fires at the Philipsburg Landfill:

The Nature Foundation reiterates that the only solution to this most critical issue is through aid that is managed publicly and transparently and outside the realm of politics. This is an environmental and public health disaster just as bad, if not worse, than hurricane Irma.

During previous studies in air quality and soil composition at the Philipsburg landfill, the Nature Foundation recorded positive results for nickel, zinc, arsenic, lead, cadmium, copper, chromium and other heavy metals. Of particular concern are arsenic, lead, cadmium, and copper because of the human health effects. Particularly lead, arsenic and copper can be quite toxic to humans and have been shown to cause some forms of cancer.

These same chemicals are released into the atmosphere through either smoke or through falling fine ash and therefore pose a significant health risk to the community. Landfill fires also release high levels of Carbon Monoxide (CO) into the atmosphere which causes additional health effects through depriving the body of oxygen.