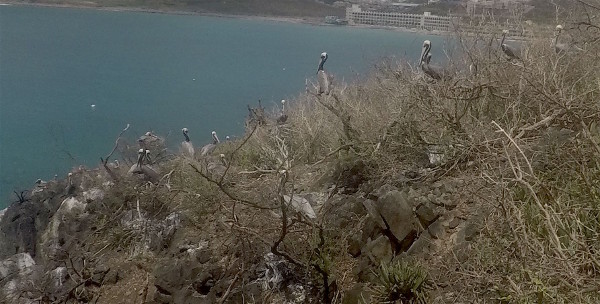 COLE BAY:— During one of its recent post-hurricane ecological assessments, the Sint Maarten Nature Foundation recorded the reestablishment of breeding colonies of the National Symbol of Sint Maarten, the Brown Pelican (Pelecanus occidentalis). After the passing of Hurricanes Irma and Maria, the Nature Foundation assessed the monitored breeding colonies for the Brown Pelican and found that some forty breeding pairs were absent: “A week after Hurricane Maria during one of our first assessments we were able to establish that we completely lost the Divi Little Bay Pelican Breeding site below Fort Amsterdam. We were very disappointed to note that the complete breeding site had been decimated, especially since we have been monitoring that area since 2010. Last week we returned to the site and to our surprise we found that the majority of breeding pairs had re-established themselves, with numerous nest being laid and eggs being brooded,” commented Tadzio Bervoets, Nature Foundation Manager.

The Sint Maarten Nature Foundation has been monitoring the Divi Little Bay Breeding Colony since 2010 as a part of its Pelican Monitoring Program. The Brown Pelican is the National Symbol of Sint Maarten and is a key indicator species for the health of the marine environment: “After the storms, we encountered numerous pelicans that sustained serious injury, many of which had their necks broken. We also lost about two-dozen nests at the site so you can imagine how happy we were to see that the colony re-established itself, with numerous nests already being brooded,” concluded Bervoets.

The Sint Maarten Nature Foundation will continue to monitor the breeding sites and will conduct its annual pelican.

Applying for a U.S. Student Visa or Canadian Study Permit” workshop scheduled for May 25, 2021. | SMN NEWS

May 7, 2021
0
PHILIPSBURG:— An informative workshop entitled “Applying for a U.S. Student Visa or Canadian Study Permit” will be held on May 25, 2021, by the Student Support Services Division (SSSD) of the Ministry of Education, Culture, Youth, and Sports Affairs.This...
Read more