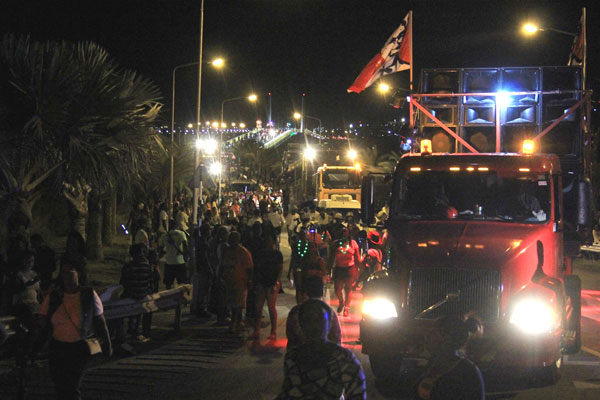 PHILIPSBURG:—Time for the big rigs to take to the road again. The St. Maarten Carnival Development Foundation (SCDF) will host the annual Causeway Jump-Up on Saturday, March 18 and with a slightly different route this time around.
The event will also mark the first sighting of “big rigs”, the signature Carnival trucks and trailers, for the start of the Carnival season. The Causeway Jump-Up has grown into one of the most anticipated events in the pre-Carnival schedule, drawing an estimated 10,000 people annually.
The SCDF explained that this year, the route will deviate somewhat from previous years. The jump-up will start at Kim Sha Beach, make its way over the Simpson Bay bridge and down the Simpson Bay Stretch. It will then roll over the Simpson Bay Causeway and up Union Road.
When the jump-up gets to the Kruythoff round-about, instead of going back to Kim Sha where it has ended the past few years, it will go up and over Cole Bay Hill. This route is not new to the SCDF having been used as part of the Unity Jump-Up of the past.
Once over the hill, the jump-up will end at Le Gran Marche parking lot where the foundation will host an after party as part of its Road to Carnival party series. “We are anxiously awaiting this event because for us it signals the start of the Carnival season and of our many pre-Carnival events. The Causeway Jump-up is now a mainstay of Carnival and we expect another success this year,” the SCDF said.
The jump-up kicks off at 8:00pm and should feature 4 or more bands on the roads.