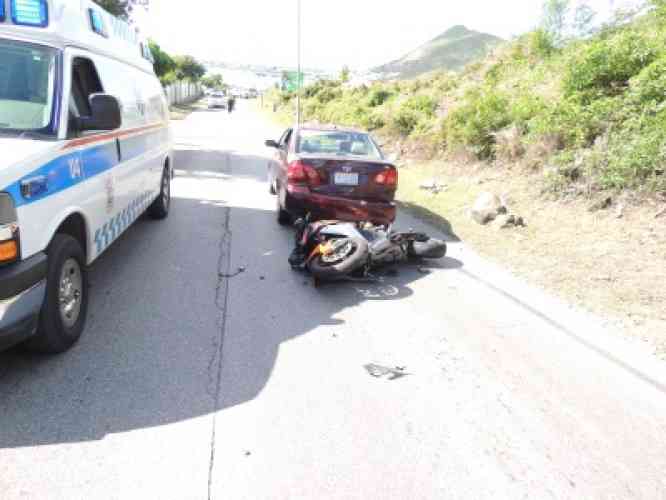 PHILIPSBURG:— The police traffic department is presently investigating a traffic accident which occurred in the morning hours on Tuesday, September 25th involving a motorcycle and a private vehicle. According to the report the rider of the motorcycle was traveling on the A. Th. Illidge road coming from the direction of Mount William. At one point the motorcyclist overtook a blue car that was driving in front of him. For unknown reasons the motorcyclist lost control of his vehicle and ran off the road. The motorcycle, however, continued sliding forward and rear-ended a brown Toyota with license plate P-2305 that was also traveling in the same direction.
The motorcyclist suffered minor injuries to his right leg. He was treated on the scene by paramedics and then transported to the medical center for further treatment.

November 28, 2020
0
PHILIPSBURG:— The Sint Maarten Police Force together with the Gendarmerie will be conducting joint control during the upcoming weeks. The control will focus on...

November 28, 2020
0
PHILIPSBURG:— As of November 28th, there were nine (9) persons who tested positive for COVID-19; however, there was a recovery rate of eleven (11) persons; bringing the total active cases to ninety (90). The total number of confirmed cases...
Read more