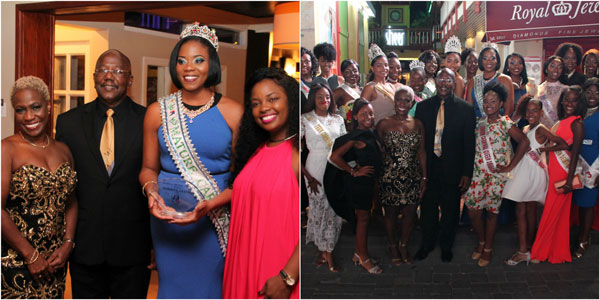 Present at the Queens Dinner were the 4 reigning Carnival Queens, Junior Queen Trinity Christina, Teen Queen Diandra Marlin, Senior Queen Estika Halley and Mature Queen Norrisa Anatol. Each of the four Queens were given the opportunity to address this year’s delegates who are busy preparing for the upcoming pageants during Carinal 2017. Each reigning Queen spoke about their experiences during the year since winning the crown and encouraged the delegates to work hard and prepare if they wish to succeed in the pageant.

“I am honored and proud to be here with you this evening… Pageantry is just like sports, if you don’t have an attitude of perseverance and the will to never to give up you won’t succeed at it. You have to have your plan and you have to work at it because you are competing to be the best in your category ”, Prime Minister William Marlin said as he addressed the gathering.

Mrs. Gabrielle Marlin also gave words of inspiration and tips to the delegates of 2017, “Remember we are all Queens, beauty is within, love yourself, God made you just how he wants you to be.”

Before the evening was over, a surprise award was presented to one of the four reigning queens for her great work in the community during her 1 year reign. On behalf of Posh Productions Prime Minister Marlin and Mrs. Marlin presented Miss Mature Queen 2016 Norrisa Anatol with the “Queens Crystal Award”.