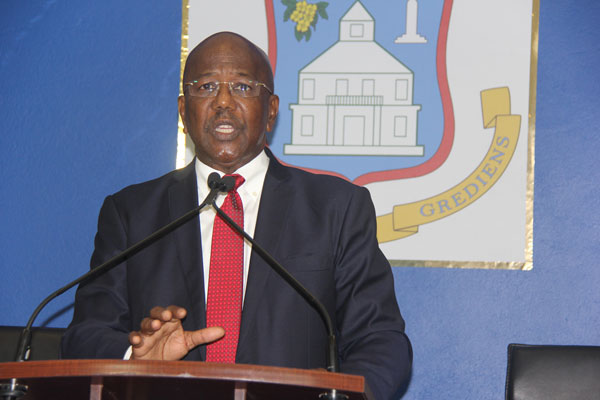 Former Director of Chamber of Commerce should not scare businesses with Pearl of China.

PHILIPSBURG:— Prime Minister William Marlin lashed back at Member of Parliament Claret Conner for statements he made regarding the Integrity Chamber and the Pearl of China Project.

Marlin said that it is the United People Party of which MP Conner is a member that committed fraud against the People and Parliament of St. Maarten when their Minister and Prime Minister bypassed parliament and signed the agreement for the establishment of the Integrity Chamber. Marlin said when the matter was discussed in Parliament while he was in opposition he voted against the establishment of the integrity chamber simply because he was against the agreement that was negotiated by the UPP Ministers and the Dutch.

Marlin said that the two Ministers that represented the UPP government committed the biggest integrity breach against the Parliament of St. Maarten. He said that MP’s took an oath to vote their conscience, however, this agreement that was signed by the UPP and the Dutch forced MP’s to vote against their conscience.

Marlin said that MP Connor “ran out” of Parliament because he knew what was coming his way and that he was unable to answer the questions the parliament of St. Maarten had for him.

The Prime Minister made clear that laws have to be made and approved by the Parliament of St. Maarten and not by government. Marlin said he would normally reserve politics for parliament where debates takes place.

Marlin also blasted MP Connor for the statements he made about the Pearl of China Project. The Prime Minister said it is lamentable for the MP who was the former director of the Chamber of Commerce to willfully mislead business people by telling them that the Pearl of China project will take away business from other established businesses on the island. The Prime Minister made clear that St. Maarten is not a place for one or two families who managed to secure a restaurant and the transportation services to the Rainforest Adventure at Emilo Wilson Estate. He said it was locals that owned several businesses on the island over the years.