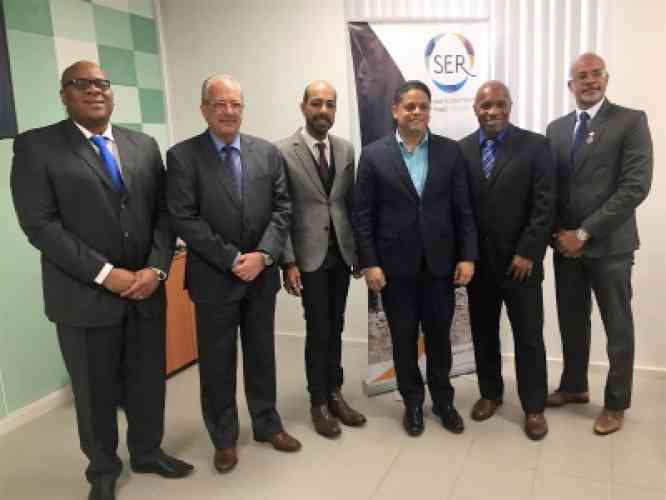 WILLEMSTAD: —On Friday, October 12th, 2018 the Social Economic Councils (SERs) of the Dutch Caribbean countries of the Kingdom, held a meeting with the Prime Minister of Curacao the Hon. Eugène Rhuggenaath. The purpose of the meeting was to achieve a sustainable policy in the field of labor/economic migration. It is important that the Caribbean countries within the Dutch Kingdom, Aruba, Curaçao and Sint Maarten, work together, each with their own responsibilities, laws and regulations. Collectively, scenarios can be explored that can lead to medium and long term socio-economic development.

All three countries are confronted to a greater or lesser extent with the same issues in the areas of population policy and socio-economic development. The challenges that present themselves in among other things, a prolonged stagnating economy, increased aging, brain drain, a social welfare system that is under pressure, an unequal labor market, the socio/economic crisis in Venezuela and the issue of undocumented migrants in general. The question here is what impact will regional and international developments of migration have on the aforementioned socio-economic issues and how policy can be accommodated in this respect.
The countries can support each other in the field of developing strategic policy, substantiated based on ‘lessons learned’ and ‘best practices’ of the Kingdom, in the region and elsewhere.

The policy will have to focus on the aforementioned challenges, as well as on the opportunities and benefits that migration and especially labor migration entails, for sustainable socio-economic development in the countries with the emphasis on future of work, social certainty, medical care, and improved living conditions in the neighborhoods.

The Presidents and the Secretary-Generals of the SER institutions gave a presentation to the Prime Minister, which focused on the theme of labor migration in the context of the aforementioned challenges and the underlying principles with regard to sustainable socio-economic development. In closing it was also proposed by the participating SER institutions to organize a joint symposium in Curaçao for the first quarter of 2019.
Prime Minister Rhuggenaath, in turn, has expressed the idea of supporting a symposium as well as cooperation between the three countries. He will discuss this with his colleagues of Aruba and Sint Maarten this month, during the next tripartite meeting of the Prime Ministers of the three Caribbean countries of the Kingdom.